Seasonal Round-up: Cosying up to Autumn

Anyone who knows me will tell you that I love the seasons. And Cornwall is certainly a perfect place to enjoy them. Being rural, Autumn for me always invites images of cosiness, golden sunlight, leafy winds and harvesting berries.
It is also a time for bringing out our box of annual autumnal reads.
Forget Halloween until a later post. Books centred around or set in autumn offer some of my favourite illustrations of all time, probably because they support my idyllic view of the season. They also tell fabulous tales...and if a pumpkin is involved, then I'm in.
Below are a round-up of some of my favourite autumnal picture books. Your list may reach wider and be completely different. We'd love to hear about them.

Pumpkin Soup, A Pipkin of Pepper and Delicious! by Helen Cooper
Helen Cooper is an author/illustrator who has delivered some of the most well known, classic picture books. However, this trilogy of tales are my personal favourites by far. 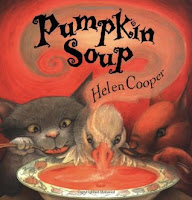 https://www.goodreads.com/book/show/904892.Pumpkin_Soup
A cat, squirrel and a small duck with a big personality make for an argumentative but humorous trio as they fight over how to make their beloved pumpkin soup. Soon duck has disappeared into the forest...will he ever be found so peace can be restored?
The story is entertaining and the pictures, especially of the pumpkin patch, are glorious. But  all three of these books gain extra heart and humour from the side commentary and actions of the bugs.
Just where has all that soup gone? 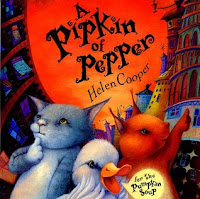 https://www.goodreads.com/book/show/914617.A_Pipkin_of_Pepper?ac=1&from_search=true
The soup needs seasoning and so cat, duck and mouse are off to the big city. Trust headstrong duck to cause trouble.
The bond between the trio, despite the squabbling, is lovable and relatable. The characters have character and it's endearing. The story gets across the vastness of the big city, the fear of being lost and the comfort of being found. It's a warm hug of a book.
I thought the artwork in Pumpkin Soup was wonderful but the colours of the big city leap off the page. I loved it so much I tried to replicate the technique with my class and we had great fun.
Turns out though, as adventurous as the big city is...there's no place like home. 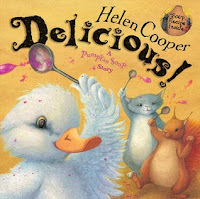 https://www.goodreads.com/book/show/2125454.Delicious_?ac=1&from_search=true
The final instalment of this trilogy takes us out of autumn and into a season where there are no pumpkins left in the patch! However, although lighter and brighter, there is still an autumnal feel about it, probably as pumpkins are still heavily mentioned. The bugs come into their own in this story, adding masses of humour.
Duck is throwing a tantrum and will not give any other soup a chance. Parents of fussy eaters will sympathise with the frustrations of the cat and squirrel and the lengths they go to to placate him. My children love to tut at the 'unreasonable' behaviour of duck without ever twigging the irony.
Will he ever be fooled into liking a soup other than pumpkin?

The Scarecrow's Wedding by Julia Donaldson and Axel Scheffler 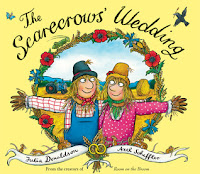 There's no pumpkin in sight in this story but it is a tale about one of my other favourite things...scarecrows. This is a charming, rhyming story of Betty O'Barley and Harry O' Hay, two scarecrows who fall in love. But when Harry sets out on a quest and doesn't return, another scarecrow steps into the mix.
This story attracted some controversy when it was published as the plot involves a cigar. As a result, I never used it as a school text. However, I think the message is clear and it has never personally worried me. Two years ago this story was used by The Lost Gardens of Heligan to create an interactive trail of fun during the Easter Holidays. The giant spreads were completely immersive. It was the best event they have ever done. 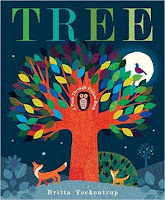 This author/illustrator takes this tree on it's annual journey through all the seasons. The simple but charming rhyme accompanies a triumph of illustrations (the autumn spreads are, of course, the best) with a host of adorable forest animals. A great way to teach little ones about the yearly cycle, this book also has a grown-up edge to its design, making it, hopefully, a hit with adult readers too. 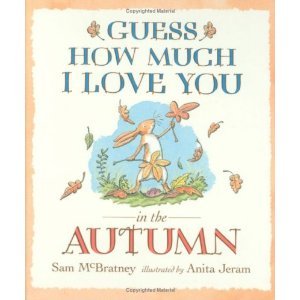 https://www.goodreads.com/book/show/8097891-guess-how-much-i-love-you-in-the-autumn?ac=1&from_search=true
As charming as the other books in the series, this tale includes the excitement of the autumn wind without losing it's gentle and calm narration. Big Nutbrown Hare and Little Nutbrown Hare's bond encourages the readers to also bond over a snuggly, buggly bedtime read.

This round-up of stories have been enjoyed every year in our house since the children were little. But we are always on the look-out for new favourites. Feel free to share your autumnal reads with us and look out for the next blog post on this month's awaited releases.


THIS BLOG claims no credit for any images posted on this site unless otherwise noted.  If there is an image appearing on this blog that belongs to you and do not wish for it appear on this site, please E-mail and it will be promptly removed.
at September 08, 2019