Upcoming Release: The Strangeworld's Travel Agency -Edge of the Ocean 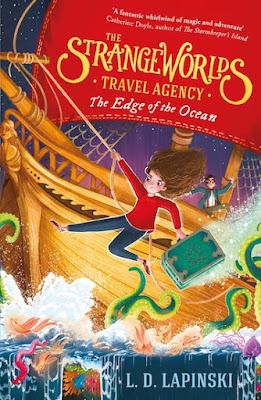 It's been a year since The Strangeworlds Travel Agency was released into the world and now, HOORAY!,  the second instalment is upon us. Bringing with it more magical worlds, pirates and a problem of epic proportions, this fantasy read is, without a doubt, as enthralling as the first.

When Jonathan and Flick receive an urgent message from The Break, they and Jonathan's cousin, Avery, travel through a suitcase to help the pirates that live there. But with the suitcase stolen and the pirates' world  disintegrating at an alarming rate, the pressure is on to find a solution. Is Flick the answer everyone is looking for?

Returning to this series was very much like excitedly packing a familiar, battered suitcase ready for a holiday. Unlike the first time round, where everything from the character to the concept was new, this book dives straight into high-stakes action. Flick and Jonathan feel like old friends and Avery is a fun and humorous addition to the cast.

From the start, Flick actively takes charge of the trio and it is clear she has really grown as a character. Her evolving dynamic with Avery is relatable and her tender and deep loyalty towards Jonathan is endearing. Although Jonathan takes far more of a backseat in this adventure, his fight with Captain Burnish is hilarious and sealed my love for him as a character. Add into the mix a stubborn pirate, a mer-queen and multiple creatures from the deep and you have a story with extraordinary imagination but which is rooted in family.

There are some notable differences between this book and the first. Whereas book one hops from fantastical world to fantastical world, book two largely centres around the world of The Break and the urgent problem of that world disappearing. However, this does not make the novel any less exciting than the first. Through the action, L.D Lapinski cleverly weaves a bigger picture, a sense of impending disaster that will affect every world that exists in Strangeworlds, and which will test Flick's power to the limit. There is a great twist at the end where the tension is pulled tight in preparation for, what will undoubtedly be, an explosive book three.

On a magical level, this book really pushes the boundaries. If jumping from world to world through suitcases is not enthralling and imaginative enough, the question of how to move giant mer-queens and huge pirate ships from one world to another is gripping. For me, there were some definite parallels to His Dark Materials with schisms and magical particles, which only emphasises how wonderful this series is. I loved how Flick's own family background was brought in at the end and can't wait to see what happens next in her adventure.

The Strangeworlds Travel Agency-Edge of the Ocean is available to pre-order and is released on April 15th 2021.