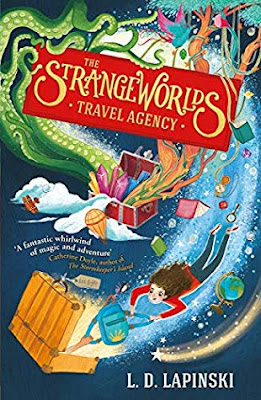 Escaping into one fantasy world is tempting enough but when there are a whole rainbow of magical worlds to explore in one book, it sounds almost too good to be true...

Rest assured, it is definitely not too good to be true! The Strangeworlds Travel Agency sweeps you up and whisks you away to places that crackle with imagination and magical delight.

From a bouncy world full of sweets to a forest that has echoes of Peter Pan's famous 'Lost Boys', from a sinister, abandoned lighthouse to the bustling 'City of Five Lights', this story whisks you on an epic adventure through worlds that will make you gasp in wonder.

Twelve year old Flick is the epitome of 'normal'. Her family are normal and her life is normal. That is until she discovers The Strangeworld's Travel Agency, run by eccentric Jonathan Mercator.

When Jonathan realises that Flick can see magic, he welcomes her into an exclusive society - one that allows members to travel across the multiverse through suitcases. But, whilst Flick is dazzled by her new adventures, it is clear that Jonathan is keeping dark secrets. Desperate to find his missing father, he embarks on a journey that plunges both himself and Flick into deadly danger. For the worlds are changing - threatened by a leaking magic - and some people will do anything to escape them...

This book, filled to the brim with L.D Lapinski's phenomenal creativity, is the ultimate fantasy read. It begins with the joyful feel of a kid in a sweet shop before twisting into a dark, breathtaking adventure. It charts not only the discovery of worlds that we have all dreamed of ourselves, but also Flick's discovery of who she is and where she fits within the magic.

The character of Jonathan is unusual. Here we have an older - almost adult- mentor showing Flick the ropes of the magical society that he is Head Custodian of. Whilst his scathing sarcasm is fun to read, his guarded attitude and wariness is a stark contrast to Flick's jubilant innocence and his story just as compelling. It is Jonathan's turmoil that drives the first part of the novel, with Flick very much in the passenger seat. However, when she discovers the extent of Jonathan's lies, she is forced to come into her own with a power and strength she could never have dreamed of.

As this is the first in a series, the story leaves the readers with a whole suitcase full of unanswered questions and an insatiable thirst for more. With parallels to well-loved magical lands such as 'Peter Pan' 'Oz' and Phillip Pullman's trilogy 'Northern Lights' (in particular the world-jumping that occurs in 'The Subtle Knife), it promises to become a memorable and epic quest steeped in a depth of magic that I haven't experienced for a long time.