If you read my last blog post then you'll know that for the last six months or so I have being trying to make the transition from picture books to chapter books with my little ones. Although picture books will always be an unwavering feature in our family home, the time feels right for some deeper, more complex stories.
Easy? I thought so.
Actually, the journey hasn't been that simple (see blog post 1) but I have had incredible fun (has anyone ever told you I love chapter books) scouring the current books on the market that will measure up to the success of the shorter Roald Dahl tales that captivated my six year old daughter and four year old son. In fact, I had forgotten what a captivating and genius storyteller Dahl is.

His audio books have also gone down a storm in the car and, of course there are the TV adaptations that we have watched after reading the stories.

But what next? I tried to dig out some of my old favourites. Milly Molly Mandy by Joyce Lankester Brisley, brings back vivid childhood memories and feelings for me as it was one of the few books my mum read to me. I found it in a charity shop and was delighted. My daughter wasn't! We barely got through the first story before I was met with a resounding NO! Clearly, my nostalgic, old-fashioned reads were not on her menu. Fair enough!

So, next, we ventured into picture book/chapter book cross-over. Tracey Corderoy is a brilliant example of an author who does this with a lot of her books and she is also a personal favourite picture book author. All three of my children loved the ickiness of The Grunt and the

Grouch and I got really excited when I realised it had been developed into a chapter book.

The Grunt and the Grouch, Beastly Feast by Tracey Corderoy
👍👍👍👍👍
These junior fiction books are split into three different stories - one of which is the same as cover and then there are two others. These books are great and promise all the gooiness and yuckiness that the picture book offers. It was an instant hit with my four year old son and my eight year old daughter, who were attracted by all the icky sound effects I created, but my six year old was slightly less enthusiastic. I don't think this is because anything is lacking in the stories. They move at a terrific pace and are full of gruesome action. I think it is more the change in set-up from a picture book to a chapter book. It's 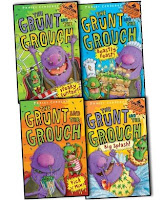 less looking and more listening and this is a harder skill when there are so many other distractions. Listening to audio stories in the car has massively helped here and my daughter is as vocal as the others at requesting these as soon as they have clambered into their seats. In fact, we have a rule now that we can only listen to the audio chapter book if all three children are present, so that the others don't miss any.
The Grunt and the Grouch are great universal characters and bounce off each other so well. They're also great at causing trouble and what children don't like hearing about characters causing mayhem? Hehe. 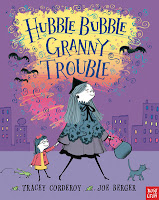 Following the same format as The Grunt and the Grouch, this series of picture books has now crossed over into junior fiction books -with each one having three separate stories that are split up into chapters.
This series is right up my six year old's street. From witches to spells to the colour scheme of the book, it is everything she enjoys and because the picture book was such a hit, I invested in a whole set of the chapter books.
However, I have to confess I have found these a little disappointing. 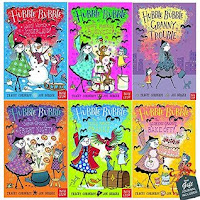 Despite the covers being hugely attractive with the rainbow colours, we found the stories rather repetitive and a little bit flat.
The premise is that Pandora is embarrassed by her magical Granny and begs her not to do spells (well most of the time). This doesn't really change throughout the stories, although the seasons, settings and scenarios do change and offer a tempting variety. From fright night to bake off to winter, there is bound to be a story that appeals. They just didn't hold my daughter's attention and she very quickly stopped asking for them.
As I have said above, I am a huge fan of Tracey Corderoy, especially her rhyming picture books. The Grunt and the Grouch picture book is non-rhyming but hilarious (the book begins and ends with a double spread picture of all the icky things on the Grunt's shelf and they love it!). The Hubble Bubble chapter books have five star reviews on Amazon and so we might return to them and give them another go. I would also be interested to see how Tracey Corderoy and Steven Lenton's latest cross-over series, Shifty McGifty and Slippery Sam is received in our house. As we have yet to try the chapter books, watch this space... 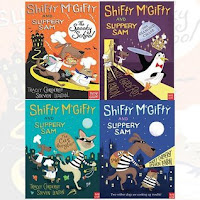 Marge in Charge by Isla Fisher
👍👍👍👍👍
So we've tried my nostalgic reads and cross-over books but what are the celebrities up to? These books are often well publicised and that is how I heard about Isla Fisher's series, Marge in Charge. I was a fan of hers when she was in the Australian soap, Home and Away, and after hearing her talk about the books with passion on the television, I decided to try them out on my little ones.
I'm so glad I did.
Jemima and Jakey's world is chaotically turned upside down when they meet their new babysister Marge. Marge is tiny, has rainbow hair, royal connections and has done everything you can possibly imagine- well so she says. Throwing Mum's rulebook out the window, Marge leads sensible Jemima and mischievous Jakey on brilliantly wild and wacky adventures.

The character of Marge is genius. She is a rainbow rocket pocket who comes alive with bags of humorous dialogue and wacky warmth. She contradicts the often 'serious' adult characters in children's fiction and offers rip-roaring entertainment that challenges Jemima's need to be sensible. The stories are incredibly fast-paced and hugely dynamic.
Marge is Charge was a success and even though my daughter oftern pretended not to be listening...she was!
There are currently four books in this series, each book containing three separate stories. Marge and the Pirate Baby and Marge and the Great Train Rescue are equally as funny. (Look out for the wedding story as that is a personal favourite!) However, for me, the fourth book, Marge and the Secret Tunnel didn't live up to the standard of the first three. The pace seemed to drop, the adventures were a bit more mundane and attention waned. It felt like it was written differently-maybe in a rush-and didn't hold the same level of sparkle.
Is Marge getting tired? I really hope not, for when she is on form these books are brilliant.

The Naughtiest Unicorn by Pip Bird and David O'Connell

We came across this series, published by Egmont, when my daughter was sneakily searching on Amazon for mermaid and unicorn stuff and brought this to my attention, knowing that if it's a book then she might just be allowed it. Thrilled that she was finally taking an interest in chapter books and dazzled by the rainbow/unicorn cover, I indulged her and we started the book the next day.
What could be more fun than going to school and having your very own unicorn to bond with? Nothing in my book, but Mira gets more than she bargained for when she ends up with 'unusual' unicorn, Dave. Dave has a mind of his own and a mind that will do anything for doughnuts. Mira might just have her work cut out before she can go on a quest.
There was some lovely diversity in this book and the usual sibling rivalry was countered by the strong theme of friendship. Dave provides bags of comic humour and, in the end, it was my son who fell in love with this book. (Apparently, for my daughter the read did not match the thrill of the purchase!) At four years old he drank in every detail and recounted them, delighted that in the interactive quiz at the end, 'Which unicorn are you?", he came out as Dave. Must be the shared love of doughnuts!
My one quibble was that the complex time difference between worlds seemed unnecessary. It worked for Narnia but I'm not sure it worked here. Going off to unicorn school in the holidays sounded perfect but having days at unicorn school squeezed into one 'normal' day seemed odd, especially as it was only mentioned at the start of the book.
However, we loved this glitter-mad tale. Glitter-picking in a glitter glade is enough to convince me to read more of this series and my son is already asking for more of loveable Dave. What more can my daughter want?

I'm not quite sure but, as we continue our journey from picture book to chapter book, I know I'm having a whale of a time and we've had some fantastic fun among the reading. There's nothing more frustrating than getting excited about a book only for them to turn their back at the end of the first page. But, no pressure! We'll give it a bit longer then move on to something else. Old, new, wacky...you name it, we'll try it.

This blog takes no credit for images of book covers posted on this site. All links to the images and books mentioned are below and taken from Goodreads.