The Christmasaurus by Tom Fletcher Illustrated by Shane Devries 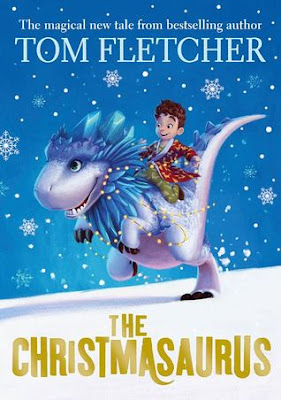 This story roared into my life two Christmas' ago on the back of my children's enthusiasm for 'The Dinosaur that Pooped Christmas', also by Tom Fletcher (and Dougie Poynter). Although they were too young for this middle grade novel, I couldn't resist the pull of the cover and the curiosity (plus possibly a smidge of scepticism) of how Christmas would be combined with a dinosaur...
By the end of chapter one that scepticism had vanished and I was pulled into an icy, magical whirlwind of a tale full of warmth (despite all the snowy scenes) and enchantment. In fact, I loved it so much it remains my favourite Christmas story to date.
The book feels well-plotted, is full of delightful characters and is bursting with more imagination than fruit in a Christmas pud. The description of Santa's ranch in the North Pole should fulfil every child's dream and the Christmasaurus is certainly one of a kind.
William Trundle loves two things: dinosaurs and Christmas. No surprises then when he asks Santa for his very own dinosaur for Christmas...except there is...a surprise that is...for there is something more hiding under the ice than a toy dinosaur and even Santa might get more than he bargained for.
When, William is targeted by the new school bully and his life quickly descends into abject misery, a Christmas adventure becomes exactly what William needs. Bring on the Christmasaurus!
But there is more to this story than just Christmassy fun. The story is inclusive, with the main character being a wheelchair user, and gives a strong insight into both the impact of bullying, the life of a bully and the emptiness of losing a loved one.
If you are a both a Christmas and a dinosaur fan then this is a dream read for you. If you are not particularly a fan of either, then give it a go anyway, it's charm might just win you over.

The Christmasaurus and the Winter Witch by Tom Fletcher, illustrated by Shane Devries 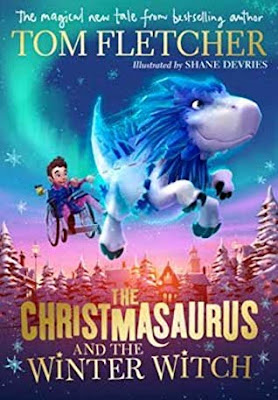 After my rave review of the first book, this sequel was pre-ordered months before it was released.
Imagine my surprise then, when half-way through this one I was almost at the point of giving up...and I rarely give up on a book once I've started it.
At first, I couldn't work out what the problem was. The imagination of the tale was beyond belief, the characters as loveable but the story felt random, odd, and I felt strangely disconnected.
And then I hit upon the trouble. Whereas in the first book, William Trundle is in desperate want and need of something, this time our main character is happy and content and events just seem to strangely unfold around him...
and then almost halfway through the story, William meets his lost mother and from that moment, everything clicks into place.
William Trundle is delighted when Santa pays an unexpected visit and whisks his new blended family off to the North Pole for a sightseeing tour. But strange things are afoot. Why is Santa acting peculiar? And who on earth is the Winter Witch?
Meanwhile, thanks to William's old arch-enemy-turned-new-sister Brenda and her greed-grabbing father, the whole future of Christmas is threatened. With the help of the Christmasaurus, can he possibly save Christmas and those he loves most?
For me, this was a book of two halves. The second half was a story to rival the first book whereas the first half felt rambly and disorientating. Tom Fletcher's imagination is astonishing, the descriptions delightful and the take on time travel the most terrific I've ever read.
Unlike the first book, this is a fractal-filled storm of a read... more challenging in both plot and time...but definitely worth sticking with...especially if you want to know who the Winter Witch really is?