The Girl who Stole an Elephant by Nizrana Farook 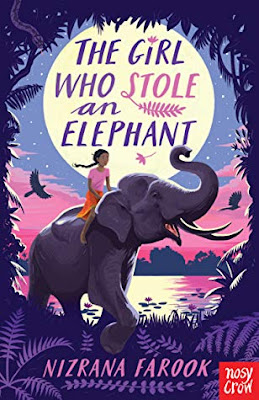 If you like feisty female leads then this main character is for you! Wild, daring but incredibly kind-hearted, Chaya is a modern day Robin Hood, robbing the rich to help the suffering poor.
But when a child from the village loses a limb after a crocodile bite, Chaya herself bites off more than she can chew when she tries to help him by stealing the Queen's jewels. Bringing devastation upon those around her, including her most loyal friend, Neelan, she has no choice but to escape into the jungle - taking Neelan and unwanted companion, Nour, with her...oh and not to mention the King's own elephant, Ananda!
Chaya is a charmer - so strong in character you won't be able to stop yourself following her into the jungle either. She steals, she leads and she plots with conviction, her snappy banter with Nour is both amusing and relatable and her friend, Neelan, is truly loveable.
The story itself offers the rich, exoticness of the Sri Lankan jungle, an original and intense plot, a thrilling, fast-paced adventure with a clever twist thrown in for good measure. There is a strong message of girl-power which runs alongside the theme of rich versus poor.
The ending was tense till the final chapter, not going the way I imagined. However, without giving spoilers, I was a little disappointed in the final confrontation. This is my only minor criticism amid what is a compelling and thoroughly enjoyable tale.
at January 26, 2020