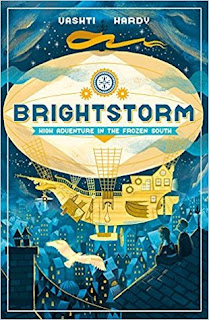 If ever there was a time to get lost in a book, then this is probably it. So how about forgetting the worries of the outside world for a day or two and sailing off on a billowing sky-ship for a storm of an adventure.
Vashti Hardy weaves a mind-blowing, fantastical journey across 'The Wide'- a parallel world of perilous seas and undiscovered continents which takes you as far south as South Polaris and as far east as anyone has ever travelled.
Arthur and Maudie Brightstorm, twins who have been stripped of everything they love, escape the clutches of slavery and set off on a daring sky-ship voyage with explorer Harriet Culpepper. Their mission is to find out the truth about their father's disappearance, to discover whether he is dead or alive and if the damning claims made against him by the intimidating Eudora Vane are true. 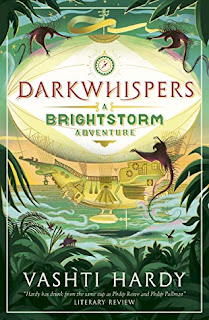 In Darkwhispers, Maudie and Arthur, along with the crew of the Aurora, embark on a new quest to uncover what has happened to missing explorer, Ermitage Wrigglesworth. But their journey east unearths secrets shrouded in shadow and a place they could never have imagined. Will they be able to keep themselves and their surprising discovery safe from the greedy, manipulative clutches of Eudora? And will they ever be able to return home?

Vashti Hardy offers an enthralling escape with these novels. The world she has created feels real and vivid, her main characters are driven by a powerful and heart-wrenching purpose (making them both relatable and inspirational) and the plot is an exploratory delight of twists and turns. Unlike other recent books I have read, I didn't find this so much a fast-paced, edge of your seat rollercoaster ride but rather what I imagine a sky-ship ride to be in itself: breath-taking, full of wonder and truly unique. Just the mention of 'Thought Wolves' and 'Water Bears' and a city built on the edge of a waterfall makes my spine tingle.

Brightstorm was the first book I have listened to in audio format for many years. As I drove the several hours from my destination to home in the dark, I became completely enraptured by the story. The intoxicating nature of 'The Wide' draws you in and rocks you like a lullaby with sharp punctures of shocking reveal. The crew feels like family and was it was a joy to return to them in the sequel.

Darkwhispers offers the discovery of a new land and a really interesting, refreshing and positive take on the theme of ecology, archaeology and how humans and nature could potentially unify as one. Instead of preaching to us, Hardy shows us an insight into an alternative reality where nature is respected, revered yet enhanced to accommodate the needs of the population. Through Eudora Vane, Hardy also clearly highlights the flaws of humanity and how the future of a nation and continent relies on the attitudes and insight of the people. It gave me hope for what the future of our planet could hold - in the right hands of course!

So, if you want to lose yourself in an awe-inspiring, hope-filling adventure with fantastically plucky characters who emcompass ambition, aspiration and determination, I highly recommend giving these books a place on your shelves. You won't regret it!
at March 18, 2020