The Unadoptables by Hana Tooke 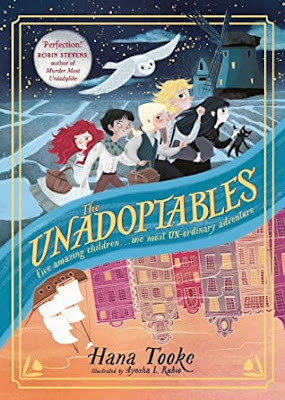 Oh my heart! 💔 I'm not sure I have the words for this beautiful, gut-wrenching but gripping tale, exquisitely told by Hana Tooke. It is a future classic - a tale of hope, sorrow and joy that will evoke flowing tears, a fierce attachment to characters that you just want to bring home and a roiling hatred for villains so vile, you'll want to finish them off yourself.

Welcome to 'Little Tulips' - the bleakest orphanage in the city of Amsterdam- where in 1880, five babies were abandoned in the most unusual manner. Here starts the journey of Milou, Sem, Egg, Lotta and Fenna - the 'unadoptables' unable to find a home.

When cruel matron, Gassbeck, decides to sell the  orphans off to sinister sailor, Rotman, the five inseparables have no choice but to run for their lives, to the outskirts of the city where Milou believes her real family awaits her. Following the clues from her past, she leads them to an abandoned windmill where a puppet-maker once lived. Convinced that the windmill holds the key to her identity, Milou convinces the others to stay and forge a home. But curious eyes are watching, Rotman is lurking and the Kinderbureau are smelling a rat. Will Milou ever uncover who her true family are and find her happy end?

Although predominantly Milou's story, this book would be nothing without the unity of the five adorables who you will want to adopt by the end of chapter one. Bursting with heart and soul, this book weaves a tale of gothic intrigue - puppets, nightmares and clock-makers- with the cruel reality of life as destitute orphans. Milou's flawed but desperate tenacity will gouge claw-marks into your heart and the orphans' unbreakable bond is beyond endearing. Gassbeck and Rotman are villains to rival Cruella de Vil and Fagin and the role of the puppets is truly captivating.

Not all the adults are rotters, however. Edda the curious clock-maker, although somewhat unfathomable, brings a sense of stability and safety to the story and plays a key role in the ending. As far as endings go, this one will not disappoint. It keeps you guessing until the end and is one of the most satisfying and moving conclusions  that I have read.

For me, this novel, although fresh and original, had echoes of 'The Sound of Music', 'Oliver Twist' and 'A Little Princess.' The storytelling felt traditional, the setting was gritty and the plot intoxicating. It is a love story, a gothic nightmare and a tale of friendship, the tendrils of which will entwine around every heartstring you own and stay there.

‘The Unadoptables’ is available to pre-order via online retailers.