Welcome to our stop on the blogtour for
TRAILBLAZER
the true story of Lily Parr, 'the unstoppable Star
of Women's Football. 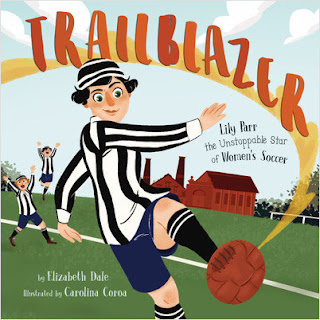 When my dad found out his third grandchild was a boy, he leapt from his chair and punched the air. Why? Because he finally had someone to play football with.
Sadly he never got the chance to see that it would be his oldest granddaughter, not his grandson, who would become the football player of the family.
Such assumptions are tackled head on in 'Trailblazer' - a new release from Maverick Books which tells the life story of Lily Parr, a female footballer as fast and furious on the pitch as any male opponent and who became a trailblazer for women's football.
Lily Parr, what a star! A world class female footballer!
Born in 1905, Lily grew up playing football in the street with her brothers. By the time she was 14, her exceptional skills were turning heads and she took a factory job which also offered her a position on their female football team. But Lily and her team discovered that the path to success was not going to be an easy one... Refusing to give up on her goals, Lily kicked out against adversity to become one of the most celebrated female football player in history.
Chocked full of dynamic illustrations, interesting football facts and a timeline, Trailblazer is the perfect narrative non-fiction book for football fans. It charts the complex journey of women's football whilst showing that it's popularity goes much farther back than recent years.
Yet, it is not only a story about football. It is a story about tenacity, perseverance and determination. A tale of tackling prejudice, of overcoming challenges and of the importance of fighting for equality. This is a message that is clearly still as relevant today as any past period in history. Whether young readers have goals related to football or not, this story, told beautifully by established author Elizabeth Dale, encourages them to reach for the stars and endeavour to be the best they can be. The introduction to Lily's startling tale sums this up beautifully:
'This book is for all who have fought prejudice to fulfil their true potential and continue to do so.'
Such an empowering message, wrapped up in an engaging and amazing true life story, makes this book a fantastic addition to any bookshelf. It champions not only the brilliant team spirit of football but also the importance of history, of youth and of nurturing individual talent, whatever gender you happen to be.
Trailblazer is released on Monday 28th June and is available to pre-order through the following links:
Hive.co.uk
Amazon.co.uk
Book Depository.com
at June 22, 2020