UPCOMING RELEASE - The Wizards of Once: Never and Forever (Book 4) by Cressida Cowell 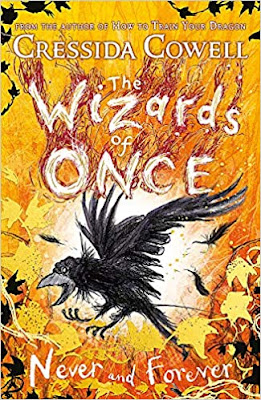 It's almost here! The fourth and final instalment of Cressida Cowell's amazing 'The Wizards of Once' series. After following these books from the beginning, this is something I have been waiting for since last September and I jumped to have the chance to review it via Netgalley.
Join Xar, Wish and Bodkin as they continue their quest to rid the WildWoods of the diabolical witches. This time, along with their band of loyal followers, they must journey into the Mines of Happiness to complete the spell that will banish their enemies, before taking on the KingWitch himself. But is Xar's poisonous witchstain too strong to cure? Does wispy Wish have control of her magic-that-works-on-iron? And what if their entrusted spell fails to work?
This is an adventure of epic proportions; a quest involving warriors, wizards, witches, giants and sea-monsters which creaks with ancient magic. Xar is a wizard with no magical powers. Wish is a warrior with a rare magical eye that works on iron. But in this world, magic doesn't work on iron-that is the accepted and proven rule! Yet, as these young heroes throw the rule book out the window and lead their tribes into a chaos that's riddled with curses, will deep wrongs ever be righted?
This is a book of unique, mysterious storytelling from an author who is also guilty of dispensing with the rule book. The ever present but unknown narrator TELLS us the story with large doses of opinions and finger-wagging, yet it works to the point of being masterful. Becoming immersed in this story feels like having a spell woven around you; one that pulls you in and keeps you captivated from beginning to end. The tone is deep and magical as we are transported back to a forgotten age where an eclectic mix of characters merge together to create a intoxicating cocktail of delicious madness.
There's bags of humour, which prevents the story from being too serious. Xar's brilliant tongue-in-cheek, reckless, over-confident character brings a large dose of light-hearted humour, balanced by the more serious Wish. Bodkin and Caliburn, although deeply anxious, also bring their own brand of unintentional amusement and the hugely entertaining Encanzo and Sychorax (Xar and Wish's respective parents) offer a brilliant satirical insight into the demands of being a responsible adult. Squeezjoos is beyond endearing...and then there is the flying door, the parping trumpet, not to mention the animated antics of the key, spoon and fork.
Don't relax too much though! Throughout all four novels the stakes are exceptionally high, danger lurks around every corner and the monsters are knee-knockingly terrifying. From the Kingwitch himself, to the vast jaws of the Nucklavee, to the wily, mine-dwelling Tatzulworm, this story is not for the faint-hearted. Still, it seems that our heroes have it all under control...
The ending was genius! With four books leading up to a conclusion, the question often is, can it deliver? I can honestly say this one did, both in the dynamic action of the final battle but also in the way the characters delivered and in the surprise and hilarious twist at the end. In contrast, the revelation of who the narrator wasn't quite as surprising or satisfying, but it made sense. I also felt that the character of Wish was slightly lost in the final tale and would have liked to have spent more time inside her head, especially in the lead up to her final confrontation with the Kingwitch. However, none of this detracted from the utter brilliance of the overall plot.
So, if you're thirsty for a quest with a difference then I cannot recommend this series highly enough. Don't wait for it to be turned into a movie! Curl up, start from the very beginning and prepare to lose yourself in this fantastic fantasy adventure.
(Many thanks to NetGalley for giving me the opportunity to read and review.)