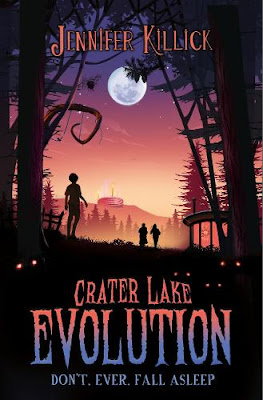 The bugs are back! And whilst that is SERIOUSLY not good for Lance and co, it's fabulous news for every reader who enjoyed Crater Lake last year. The 2020 middle grade release, written by Jennifer Killick and published by Firefly Press, seemed to create more impact than the meteor that not only made the crater at Crater Lake Activity Centre but brought alien spores with it. And it's not surprising that the first book went down a storm - it had been on the edge of my seat and, most importantly, kept me wide awake! But now it seems the bugs were not defeated after all...

Five months after the year six school trip of nightmares, Lance and his friends are no longer a tight -knit group. Struggling with the transition into high school, things have got tense. But nothing reunites a friendship like the threat of an alien take-over and some seriously strange things are happening in the group's hometown of Straybridge.

After an odd explosion at the university, the town is put under a precautionary curfew. But Lance's mum is acting weird and he's certain the bugs are back. Now it's down to him to heal the rifts that have cracked his crew apart so together they can battle to save their loved ones, their home...and the world.

Just like the first book, this brilliant sequel kicks off with spine-tingling action, a fast pace and bags of sharp banter. Killick has the uncanny ability to nail dialogue between twelve year olds and it is the interaction between Lance's loveable, but humorously dysfunctional group that make these novels such a fab read. Every character brings their own distinct personality, their own very relatable issues and, in the case of the sequel, their own axe to grind. The group has fallen apart and yet it is their deep bond and their ability to overcome the challenges that face them that makes them so powerful...so loveable...and, in fact, so highly functional at battling the enemy. This is a group whose strength is equal to those in Stranger Things and The Goonies. Furthermore, as an adult fan of The Walking Dead, the whole group ethics and plot was right up my street.

Crater Lake Evolution doesn't offer quite the same spooky setting as Crater Lake. However, with the threat being so close to home-or even inside Lance's home-the stakes are at an all-time high. Not only are their own lives at risk but the lives of everyone they hold dear are under threat. I loved that the bugs had evolved and I also loved the clever way the spores were being transmitted- it not only made sense but made the plot fresh and unpredictable. The only brilliantly predictable things was Don't. Ever. Fall. Asleep.

As with the first book, this is not for the faint-hearted. Your palms will be sweaty and your heart will be thumping but, again, Killick keeps the action within the boundary of age appropriateness as long as horror is your genre. You may not want to read it under cover of darkness but rest assured, if you do, you'll feel like part of the group.

Overall, this is another cracking read which not only delivers a creepy, blood-pumping plot but which explores the difficult realities of transitioning into high school, the pressures young people face, the strength and beautiful nature of friendship and the power of teamwork and unity. It is as heart-warming as it is chilling, as funny as it is scary and I guarantee you are in now danger of falling asleep whilst reading it.

A massive thanks to Firefly Press and Netgalley for allowing me to review an early copy. Crater Lake Evolution is now available to pre-order.