Last week, the bank holiday weekend brought some much awaited book post that brightened up our three days as much as the weather did. With lazy lie-ins, the spring sunshine to enjoy and a whole extra day to spend page-turning, we were spoilt rotten with this new selection of chapter books and younger middle grade fiction.
Unipiggle: Camping Chaos by Hannah Shaw 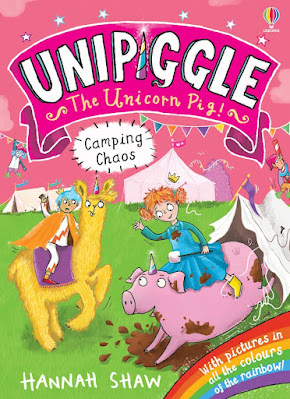 Forget the kids! I LOVE Unipiggle. Reading this series is like soaking up a rainbow and it filled my Sunday morning with sparkle. Camping Chaos is the fifth Unipiggle book to be published and definitely my favourite so far. With a new setting, a whole host of new characters (including new animals) and some tasty treats, it's perfect for anyone who loves a bit of magical mayhem.
Princess Pea and Unipiggle are off on their first royal camp with the other royal princes, princesses and companions. But someone is out to sabotage the events and soon the finger of suspicion is pointing towards firmly towards them.
With an engaging plot and fabulous illustrations, this new instalment is packed full of fun. There's a sneaky mystery to solve, some candyfloss chaos, tons of toasty marshmallows and lots of fabulous new friendships. The end of the story is heartwarming with a great takeaway message and of course there's a bit of Unipiggle magic too. We really can't wait for the next one and I'll be wanting first dibs!
Woodland Magic: Fox Cub Rescue by Julie Sykes and Katy Riddell 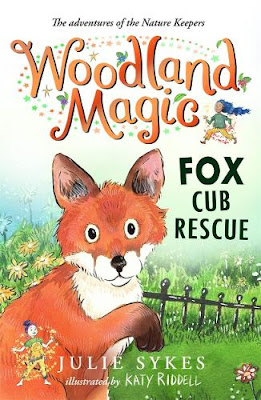 This brand new series about tiny magical folk saving animals and trying to reverse the damage caused by humans is not only charming, it has a strong eco-message. Perfect for readers moving on from picture books, it celebrates the beauty of the nature and the importance of rewilding.

In the middle of Whispering Woods live The Keepers - a secret tribe of  little people who spend their nights to care for the countryside. Cora and Jax, fledging Keepers, are desperate to pass their trial. But with the world of Ruffins (humans) proving strange and exciting, will they stay focussed on the job in hand?

Written by the author of Unicorn Academy and beautifully illustrated by Katy Riddell, readers are emerged in both fantasy and reality. The set-up of the world is great - reminiscent of The Borrowers and Mrs. Pepperpot - and the plot and themes of the story will appeal to nature-lovers, animal-lovers and fairies. Teamwork and friendship is also championed in the book as well as responsibility, the importance of not shirking your duty, using initiative and being kind and caring. I loved how the characters made mistakes and then worked to put them right and seeing the actions of the ruffins (us) through the Keepers eyes is really...well...eye-opening. And, with more books on the way, I think this is definitely a series to watch.

A big thanks to NetGalley for allowing me a review copy. 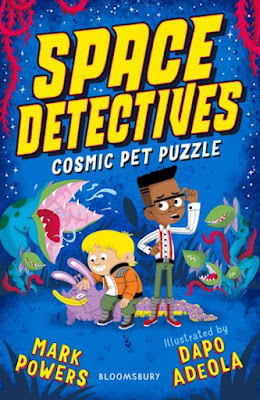 Hooray! The 12th May is going to be an outta-this-world kind of day because that's when the third Space Detectives mystery is released. Cosmic Pet Puzzle definitely wins my vote for my favourite cover yet and promises another great adventure...

When a one-of-a-kind synthpet goes missing, Connor and Ethan are stumped. Surely a creature with the legs of a cat, the tail of a crocodile, rabbit ears and a duck's bill should be easy to spot, right? Well, not on Starville where EVERYONE looks different. As Connor and Ethan try to solve the puzzle, it seems that this lost pet has disappeared into a black hole...

This is a great detective story for younger readers. Slightly shorter than the previous two books in the series, the plot is a pocket rocket that explodes across the page with pace and pizazz. The reader is launched straight into the action and their are plenty of twists and lots of action to keep us engaged.

With the setting of Starville and the main characters, Ethan and Connor, now really well established, there's a host of new characters and settings within the world to enjoy. The prologue is a returning feature and helps to seed the clues for younger sleuths to pick up on. The creatures are cute, the plants are snappy and the people are not necessarily to be trusted. The story is the perfect length for readers who are developing their confidence and independence and the good news is that there's still plenty potential for future adventures.

Treasure Under the Jam Factory by Chrissie Sains and Jenny Taylor 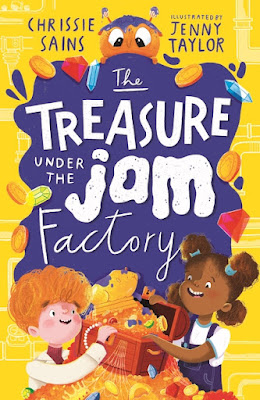 JAM-PACKED with surprises galore, a sticky adventure, hilarity and adorability comes the second in the series of Chrissie Sains 'Jam Factory' books. If you enjoyed An Alien in the Jam Factory, then you're in for a treat, for this sequel is bursting from cover to cover with even more adventure and mayhem, new characters and a more complex plot.

Scooter McLay has been working non-stop to make the grand re-opening of McLays Jam Factory jamtastic. But when Daffy Dodgy returns to claim what his rightfully hers, Scooter finds himself in a sticky situation: find the money to buy back the factory or let Daffy steal all his ideas. But then Cat, a girl with a treasure map, turns up claiming that the factory is sitting on a hidden treasure trove. Can Scooter, Cat and Fizzbee find it before Daffy does? And just what is sneaky crook Perry Pincher up too?

This is a great, fun and light-hearted story for anyone who loves inventions, quests and hilarious characters. With pirate treasure, secret jam recipes, booby traps and spoonfuls of imagination, it reminded me of The Goonies but with an edible twist. Fizzbee brings the cuteness and cleverness, Scooter and Cat provide the determination and both Daffy Dodgy, Perry Pincher and their animal sidekicks are deliciously dastardly (and hilarious). I particularly enjoyed Daffy Dodgy as an older villain and her guinea pig is just genius.

Scooter is a great MC - a disabled character with bagfuls of brilliance thanks to his hyper-creative brain. And, like his jam, his story packs a punch. It's sweet and it's fizzy, with a touch of craziness mixed in for good measure, and is brilliantly illustrated by Jenny Naylor. One thing's for sure, Chrissie Sains definitely has the secret recipe for an enjoyable and successful lower middle-grade series. I only hope there's more to come... 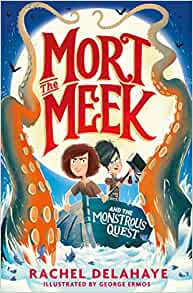 Brutal and barbaric, this second in the series of Mort the Meek makes Mr. Gum and The Nothing to See Here Hotel seem completely straight-laced. This hilarious comedy is grim, dark and disgustingly gross but will have you howling with laughter.

When the Queen of Brutalia orders her people to set sail to find her treasure, Mort volunteers to search the waves. But it's not treasure he's interested in, his family are lost at sea and this is his chance to find them.

But when Mort is paired with fierce rock-crusher, Punky, and they stumble across a mythical sea monster with a fearsome reputation, his quest goes awry. Will he ever find his family? And can he stay true to his pacifist pledge and make things right?

Rachel Delahaye, who is a BRILLIANT comic writer, has hit on a highly original concept for this series. Living on a brutal island where there is no mercy, Mort wants to be a pacifist. What makes this second book so gripping is that, underneath the fishy gags and the razor sharp text, there is a real internal and poignant struggle for Mort as he battles with the loss of his family and the stormy emotions he feels as a result. I loved this exploration of Mort behaving out of character and Punky's story arc is equally moving. There's no denying, however, that the story is absolutely bonkers. I laughed out loud, I snorted tea, I shared the jokes at the dinner table. Brutalia is definitely a fantastic fictional world that would be a real-life nightmare and readers can enjoy all the action whilst revelling in the fact they are not actually there.

Without giving too much away, the highlight of the book for me though was the discovery and treatment of the mythical monster. Here we are left with, yet again, a powerful takeaway about the destructive nature of humans. The singing scenes made me cry salty buckets and left me in doubt that this is brilliantly skilful storytelling: gross, gruesome and guffaw-inducing with a beautifully gentle touch. I highly recommend it for all crazy adventurers out there who are looking for a fast-paced, hilarious story.