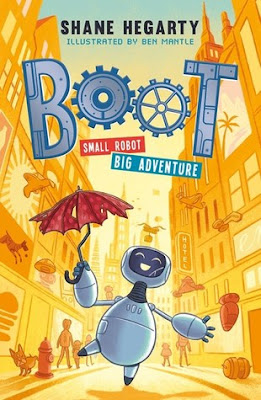 Come! Open the page and step into a future where robots are part of everyday life and where one imperfection or malfunction can send them straight to the scrapheap.
That's where, on page one, you'll find Boot - an adorable, plucky and heart-warming toy robot- who awakes inches away from a metal grinder with only two and a half memories.
Convinced that he has been sent to the scrapyard by mistake, Boot escapes his grim fate and sets out to reunite himself with the only owner he can remember - a girl called Beth. But being a lost robot is a dangerous thing to be in a big, scary city and finding Beth is going to prove tricky.
Chased by robot destructor, Flint, Boot sets off on a thrilling adventure where he meets friends, Noke, Red and Tag who help him navigate an abandoned amusement arcade, city shops and a funfair in a bid to find where he belongs. But when he eventually does find Beth, will it be the happy ever after he dreamed of?
Boot instantly reminded me of 'The Wizard of Oz' set in a futuristic world. The characters are as loveable, the journey as memorable and the plot as delightful. The book weaves a subtle message of warning about the effects that a technological future may have on the human race and yet makes us fall in love with the robots themselves- albeit the robots that are broken and unwanted. In our throwaway culture could it be possible that these characters, made of mechanical machinery, could still have value...and maybe even a soul?
Boot is a fun, moving and fast-paced adventure. And, with two more books being published in 2020, Boot's future doesn't look set for the scrapheap just yet!
at November 20, 2019