'Fortunately, the Milk' by Neil Gaiman, illustrated by Chris Riddell 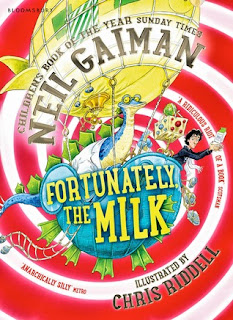 This edition published by Bloomsbury 2014

Previously published by HarperCollins 2013 and illustrated by Skottie Young.

Throw the rule book out the window. This book tells a story like no other. If you are into dream-like fantasy then this is the tale for you.
When Mum goes away, Dad is left to look after the kids and it doesn't take long for disaster to strike. There is no milk for breakfast - or worse- Dad's cup of tea. So off he trudges to the corner shop...and doesn't come home...for hours and hours.
When he does finally appear, he tells his children all about his time-travelling adventures, which began after he bought the milk and was promptly kidnapped by aliens. Aliens, pirates, vampires and a dinosaur professor with a time-hopping airship... you name it, this story has got it. Oh and don't forget the milk of course. Who'd have thought a carton of milk could save the future of Earth?
Gaiman dismisses all the conventions of writing in this story told by an adult main character to his listening children. It's a dad's fantastical anecdote blown to epic proportions - and it works! The dedication at the front of the book sets a great tone before the story even begins. I wish my dad had told stories like this one...

Follow the link to Goodreads for more information and reviews on this book as well as links to online retailers.