The Great Dodo Comeback by Fiona Sandiford and Clare Elsom 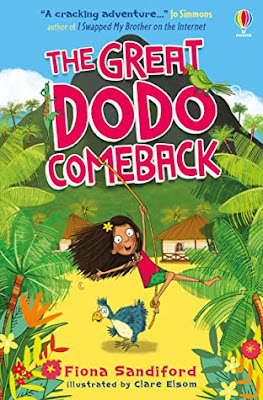 The front cover and the word 'Dodo' sold this novel to me in a heartbeat. I clicked on pre-order the second I saw it and, boy, was I not disappointed. This lower middle grade novel offers everything the cover and title promises and is an absolutely adorable read.
Leni lives in Mauritius, a beautiful and idyllic country famed for it's rare, tropical birds and the infamous extinct Dodo. Desperate to be an avian vet, Leni is thrilled when two chalk and cheese scientists arrive at her home determined to de-extinct the species. But their progress is threatened by greedy Sugar King, Benny Shoober and his cronies. Furious that his plans for sugar-cane domination are being thwarted by eco-warriors, he vows to re-extinct the dodo before it can even be de-extinct.
After reading a lot of magical lower middle grade novels recently, this brilliantly original concept (how has no one written about Dodo's before?) felt fresh and grounded but equally inventive. The setting is as sunny and inviting as it looks on the cover and the plot is as clear and dazzling as Mauritian waters, told in a warm, straight forward style.
Leni makes for a charming main character; cheerful, enthusiastic and anchored by her love of birds. Her steadiness compliments the rather chaotic scientists who arrive on the island- Professor Flowers and Professor Scissorson. These two work superbly as a duo and make a clever and unusual dynamic - two adult characters who bring so much to the plot but fail to overshadow Leni, who sits firmly centre stage. The fact that Leni is the only child character in the book added to the uniqueness of this story and yet it worked an absolute treat.
Benny Shoober and his wife, Giavanna, make for a horrible but humorous villainous couple. Benny, although quite stereotypical for a rich, greedy baddy, stands out against his plantation of sugar-canes with brilliant description and dialogue and Clare Elsom's fabulous depiction of him. Her glorious illustrations throughout this novel enhance the joy of this reading experience as she brings the characters to life on the page. Her sketches of the adorable baby dodo chicks are no exception and they are the star ending to this tale.
The plot unravels at a satisfying and steady pace- not too fast and not too slow. The main action points such as searching in the La Grotte de Vulcan, the interference of Shoober's henchmen, PawPaw and Beanbag, the hatching of the egg and the dramatic showdown at Shoober's sugar mansion are intertwined with charming and funny scenes centred around the beach huts where the scientists work and feud, much to Leni's fascination...and exasperation. There are clear links to the premise of Jurassic Park but with one hundred percent more charm than threat of being eaten. However, that doesn't mean that this story doesn't have an action packed end!
Overall, this is a delightful, upbeat read which drenched me with the warm feeling of sunshine. It will appeal especially to bird lovers and scientists in the making but...who can resist the charm of the dodo?