Why Diversity is Crucial in Children's Books

Two weeks ago I received the best kind of Saturday morning post. A bundle of books from Tiny Owl Publishing which I've had my eye on for a while. The bundle of books was entitled 'One Story, Many Voices' and included five stories from around the world- all of which were utterly beautiful and totally captivating. 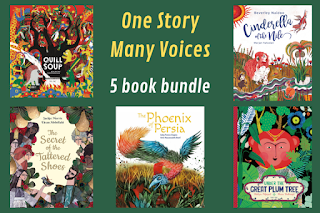 Little did I know about the incident which was about to unfold on the other side of the world. An incident which would lead to protests and discussions around an issue which sadly doesn't seem to have progressed at all. The issue of race and culture.
As I watched the disturbing events unfold and observed discussions on social media about how to begin educating young children about race, my mind wandered yet again to the power of books. If 'Black Lives Matter' so 'All Lives Matter' then surely all stories matter? And to be able to tell their stories, then EVERYONE need to have a voice.
Diversity in children's publishing has been a hotly debated topic since I returned to writing three years ago and no doubt for many years before. It has been criticised for not being broad enough, for not allowing people from ALL backgrounds to see themselves represented in the pages of a book. As a result, there has been a real drive to provide opportunities for BAME authors (Black, Asian and Minority Ethic) to get their voices heard. For example the Penguin WriteNow scheme aims to find and nurture voices which are under-represented on the page and The Golden Egg Academy run a Quarto Translation/Golden Egg Academy Diversity Award to encourage diversity in books and publishing. WriteMentor offered a scholarship to the highest placed BAME author in their Children's Novel Award, Madeleine Milburn are offering a six month mentorship with a place reserved for under-represented writers and Nosy Crow are currently offering open fiction submissions for BAME authors.
Growing up in a multicultural area of the UK means that I have vivid memories of stories from around the world being told at school. This was a really positive thing and yet, after sixteen years of teaching in Cornwall, I am embarrassed to say that multicultural texts and diverse texts are not readily available to use. Despite the above schemes and programmes, they are also not easy to locate in bookshops. Ask me to recommend such texts and my mind goes blank, except for perhaps for the well known Handa's Surprise by Eileen Browne and famous Hindu stories such as Rama and Sita.

Current, contemporary stories which reflect diversity are even harder to find. I'm not saying they are not there but it takes a lot more digging to find them. This takes me back to my interest in Tiny Owl publishing, their motto 'Picture books for everyone!" and the philosophy behind their business which is again, that everyone should be represented on the page.
Read Tiny Owl's story
Tiny Owl state on their home page that "stories are bridges to new experiences". I would go even further and say that stories are also bridges to tolerance, empathy, understanding and equality. More importantly, this needs to be modelled and taught to young children from day one but books can be crucial in helping to support this, especially in an isolated areas such as Cornwall. How can I prevent the values and attitudes which I want to instil into my children from being hampered by their lack of experience of diversity? That's a difficult question to answer but books are high on my list of tackling this issue. Promoting books like those Tiny Owl publish is vital and we need to make them more readily available.

Tiny Owl released this statement on Twitter: Link to statement

"We at Tiny Owl stand in solidarity with those who reject racism, inequality & violence. ALL of our stories reflect on how they can play an important role in children's lives to make the future more just, tolerant, understanding & inclusive. We pledge to be part of this change."

I pledge to be part of it too. After seeing the beauty of these bundle of stories, which reflect the world around us, I have to ask the question, "What are we scared of?"
at June 06, 2020