During this difficult time, reading has become more important than ever for me. I've always mostly read for escape, with fantasy, adventure and mystery being my favourite genres, and this has now increased tenfold. Having three children running around all day, everyday has been a brilliant opportunity for us to share all kinds of books as a family but I would be lying if I didn't admit to relishing that precious ten minutes (if I'm lucky) with my own book over a cup of tea.
As well as craving captivating tales which escape reality, I've also been opting for books that are slightly shorter in length. Right now I just don't fancy getting bogged down in a thick volume that will take me weeks to get through. Something I can gobble up in a week is perfect and this is allowing me to benefit from a wide, range of enthralling adventures.

Below are two of my latest reads, which I highly recommend for both competent child readers and adults alike. These tales, although very different, are full of intrigue and heart and transported me instantly out of my world. From Victorian Britain to 1960's Paris, the time, geography and strength of character all come together to weave two compelling and emotional stories.

The Vanishing Trick by Jenni Spangler 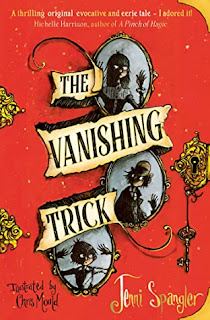 Captivating, compelling, dark and eerie. This is an intense, spine-tingling read from debut novelist, Jenni Spangler. Jenni sets her novel in the fascinating period that is Victorian Britain but twists it into a highly original story by adding a magical element.
Leander's life as a street urchin is desperate and tough. So when he meets the beautiful but commanding Augustina Pinchbeck, who offers shelter and a job in exchange for his mother's necklace, he jumps at the chance. But Leander soon realises he has made a big mistake when he meets Charlotte and Felix, fellow children who have been captured and enchanted by Pinchbeck. Trapped in a magical cabinet, Leander has no choice but to help Pinchbeck and the others pull off a sinister séance. But as pieces of Pinchbeck's plan start falling into place, Leander and his friends must race against time to save themselves from the magic that binds them to their villainous captor.
There is so much to love about this tale. The mood and setting transports you into a world which oozes threat and mystery, shrouded in a gothic darkness. The trio of children are enchanting next to Pinchbeck's formidable form, whilst the mystery of the magical cabinets compel you to read on.
The whole book is superbly plotted. The pieces of the puzzle slot perfectly into place at the right time before the story rushes towards a fast-paced, all action ending. The burst of emotion at the end caught me off guard and some tears were shed.
Pinchbeck is a phenomenal character, deliciously dark but drenched in sinister charm. I loved her complexity as an antagonist and the way the children were desperate for her approval and love. She worked brilliantly as a woman and rivals villains such as Fagin, Bill Sykes and the White Witch. I also loved how Jenni based the whole story on a fairytale, which added real depth and intrigue to the book. I would have loved the story of 'The Rat King' to have been fully encompassed somewhere in the novel, as I was enthralled by this tale and was hungry to know it from beginning to end. Because only snippets of the story were told, however, I didn't wholly understand Pinchbeck's motivation for capturing children and how the magic actually affected her. The layer of magical enchantment did take this historical novel to a whole new level for me though.
For history fans like me, The Vanishing Trick also offers a fascinating insight into the changes and trends which emerged during Victorian Britain. The introduction of photography and the thirst for seances and ghostly sightings all play a part in the plot of this story. In fact, I'm not sure there was anything this novel did not deliver on. Fantastic characters, a fiendish plot and devilish deception and sorcery make this a winning read.

The Pear Affair by Judith Eagle 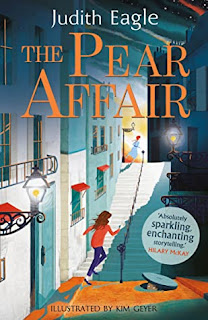 With echoes of Katherine Rundell's brilliant novel, 'Rooftoppers' and some parallels to 'Alice in Wonderland', this fantastic, heart-warming novel is a must read if you want to escape to 1960's Paris.
Penelope Magnificent, or Nell as she likes to be called, is named after her mother's designer, glitzy handbag and loved no where near as much. Invisible to her money-grabbing parents, she hankers after her old Au Pair, Pear. But Pear seems to have disappeared and so, discovering her Mum and Dad are taking a trip to Paris, she tags along with one, clear mission; to escape her nightmare life by tracking down her beloved friend. However, Nell gets more than she bargained for when she stumbles on evidence that suggests both Pear and her parents are mixed up in an alarming French mystery. Boulangeries are being contaminated and a new chain of bakeries are taking over. But what has this to do with her family? And will her new friends, leading her through the catacombs of the city, also lead her to the answers.
This book is bursting with glamorous French charm. From fabulously chic dress designers to the appetising scent of the boulangeries to the comfort of hotel laundry rooms and underground caverns, this is a delight of an adventure which will tug at the hardest of hearts. The characters shine, the plot sings and the tight friendship of the children reign supreme in the same way the gangs of The Famous Five and Swallows and Amazons did. I loved the ever so slight echo of 'Alice in Wonderland' with Nell endlessly disappearing into holes and doorways underground and Paul and Paulette paralleling the humour of Tweedledum and Tweedledee and also Nell's endless resolve to find the truth. The freedom the children were afforded was refreshing and their strength of character and determination in leading the story made the whole book a delight. The parent's felt original but as monstrous as villainous parents can be and Judith Eagle makes the city of Paris come alive around you with her in depth descriptions.
In comparison to The Vanishing Trick's dark, sinister tones, this novel feels light and frothy and joyous, but no less compelling. It enchants you with charm rather than magic and took me back to some of my favourite childhood novels. The Pear Affair is a classic in the making.