The Water's Daughter by Michelle Lovric 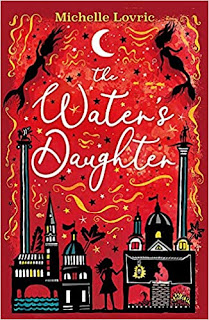 Link to Waterstones
Published: July 2020, Hachette Children's Group
👍👍👍👍👍
Not being familiar with Michelle Lovric as an author, I was instantly drawn to this book by the blurb on the back. An historical novel set in Venice featuring a main character with 'history fingers' ticked all my boxes. Add into the mix some missing boys, an abandoned palace with a sinister reputation for eating them and a deluge of never-ending rain and I was hooked. Within the first couple of pages, I knew this was going to be a sizzler.
Little did I know that the description above was a fraction of delights hidden within the pages. Forget my prediction that this would be a mystery novel, solved by a girl who can see history with a mere touch of her fingertips. This is a dazzling tale of djinns, mermaids, talking statues and pirates woven through the history of two exquisite settings: Venice and Arabia.
When another boy goes missing near 'The Palace that Eats Boys', Aurelia Bon tries to use her history fingers to uncover the secrets of her mysterious ancestral home. Instead, she finds a palace inside a palace, an Arabian castle trapped for centuries by a careless, lovesick djinn, Ghazalah
Desperate to escape the fate she has bestowed upon herself, Ghazalah wreaks havoc on the city she despises. But there are worse dangers in store for Venice - Barbary pirates led by the legendary Irish Duchess! Now it is up to Aurelia, the water's daughter, to ally with the mermaids and parley for peace.
This novel galumphs along at breakneck speed into a plot that encompasses all the magical elements you could ever wish for. Lovric's sensory descriptions bring both Venetian and Arabian history vividly to life brick by brick, and intertwines them in a deliciously inventive way. The twists and turns are as  unpredictable as Ghazalah's magic and as breath-taking as Aurelia's talent.
There were times when I wondered whether the plot was too busy to allow us to spend enough time with each character, who were all highly original and complex. Dear Valerio was endearing and constant and provided a much needed anchor to the other wilder personalities, who clashed beautifully with sparky and fiery backchat. I adored that Aurelia, Ghazalah, Simoneto Ghezzo and the Irish Duchess were all hugely flawed and had bags of agency, allowing them to make disastrous decisions again and again. Yet, none of these characters, even the villains, were cast aside. Lovric allowed the reader to see the past intricacies of each personality in the same way she allowed the characters themselves to grow in self-awareness, aiding their chance at possible redemption.
The historical element of the story was fascinating. Never before was I aware of the ancient relationship between Arabia and Venice. Lovric covers exceptional ground in a very short space of time, weaving hard facts through myths and legends and religious beliefs, then adding a large dose of magical fantasy for extra sparkle.
All the information is fascinating. From the Arabian and Venetian architecture to the tough truths of slavery to the stereotype-busting descriptions of the Djinn - this is an eye-opening read which makes me want to travel and learn and explore. It holds up mistakes made in history and mistakes made on a personal level and explores the impact they have on other humans, other nations and on the people that make them in the first place. The result is a novel that has more cleverly-crafted layers than the number of pages.
This is a magical, historical fantasy with a dark heart based in truth. It's intense, tackles serious issues and yet never stops being enjoyable. The humorous dialogue is a highlight, as are the feisty, self-absorbed characters and the shimmer of the Arabian sun shines through the rain, leaving us with hope in the future and with hope in mankind.
An absolute scorcher!
Many thanks to NetGalley for giving me the opportunity to read and review.
at July 30, 2020