UPCOMING RELEASE: I can ROAR like a Dinosaur by Karl Newson and Ross Collins 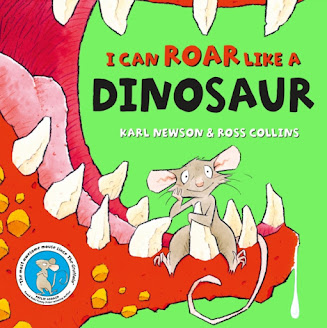 Link to Pre-order on Hive
Published: August 2020, Macmillan
👍👍👍👍👍
Mouse is back in her third fabulous picture book and she's as bold and as bonkers as ever!
Mouse is a dinosaur with a roarsome roar...or is she? Her roar seems to have vanished! Never fear, for she has a 'How to Roar like a Dinosaur' book. Now she is teaching all the other animals how to roar - but only she can do it best. Hang on a minute! There may be someone helping her...who on earth could it be? Mmmm! And anyway, what if Mouse is not a dinosaur after all...?
In Philip Ardagh's words (taken from the front cover) Mouse is definitely 'the most awesome mouse since the Gruffalo' with a personality as big as any dinosaur that ever roamed the planet. Her determination to be whoever she wants to be leads readers through another riotous story filled with endless fun and bafflement.
Mouse will not be confined to who or what her friends say she is. Teeny-tiny? Not on your nelly! Her failure to roar leaves her concerned for simply a nanosecond. Then what does she do? Get help of course!
Rolling through life oblivious to the truth that surrounds her is Mouse's bag. It's her own truths she's concerned with. And when you feel big and powerful in yourself then the scariest creatures just seem like...well...mice (or something equally small fry).
Once again, Ross Collins nails Mouse's expressions as well as those of 'the silly old bunch' she hangs out with. Coupled with some wide open, drooling jaws, we have a story dripping with humour, fun and just a little bit of fear -mine not Mouse's. The dialogue is as hilarious as the interaction between characters and I can imagine all little readers, including my five year old, following the steps to roar like a dinosaur.
After all, if Mouse can do it, surely we all can to!
I Can ROAR Like a Dinosaur is available to pre-order now and is released on the 6th August.
at July 31, 2020