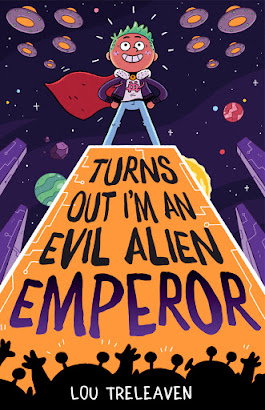 Link to publisher website
Publisher: Maverick Publishing, August 2020
👍👍👍👍
Sci-fi stories have a huge fan base and when my five year old son saw the cover of both this novel and the prequel, Turns Out I'm An Alien, his eyes popped out of his head in excitement. Okay, so he's not quite old enough for these middle grade novels, written by Lou Treleaven and published by Maverick Publishing, but he's told me in no uncertain terms that he's keeping the books until he is!
For me, however, science fiction is not my go to genre. Complex plots, which often involve travelling light years across time and space, tend to leave my brain in a spin. However, I can honestly say that this Turns Out I'm An Alien series has made me fall back in love with space and all things extra-terrestrial. I loved them!

Book 1
Jasper thinks he is just a normal foster kid until his foster parents, Mary and Bill, finally reveal he is an alien - and an alien prince at that. Kidnapped from the Planet Gloop as a baby, he was rescued and brought to Earth. But the evil Andromedan emperor has control of Gloop and is now closing in on Earth. It's time for Jasper to find out who...and what...he really is so he can save both his home and his family...times two!

Book 2
Being back to normal doesn't last long for Jasper. From the moment his sister, Holly, drags him to a Harry Handsome pop concert, he knows something is amiss. Harry may be an alien secret agent for the evil Andromedan emperor but why is he brainwashing all his fans? Jasper and Holly have no choice but to journey to the galaxy of Andromeda to find out just the emperor's plans are for the popstar but they are not prepared for what they find. Will Harry Handsome be responsible for Earth falling into the hands of evil and will they ever stop the emperor's greedy plans?
Both stories, artfully written, draw you in from the off. The plots are pacy, fun and full of satirical humour. Jasper is a likeable main character (or rather main alien) with a unique and slimy heritage that allows him to shape-shift into the most unlikely of creatures. Like me, Jasper doesn't have a clue about alien life, but is whizzed off on a slimetastic, deliciously gross journey through a universe that should feel complex but doesn't. Lou Treleaven's world-building is visual, 3D but beautifully simple. The evil emperor of the Andromedan galaxy wants to take over all other galaxies and Jasper needs to stop him. The End. But the comical and imaginative detail that is put into these worlds makes the novel; slime, mines, a Big Green Space Busting-Machine and a spiky purple ball of an emperor- what's not to love?
I adored the humour in the books. The sharp dialogue between Jasper and his sister was spot on and the parallels to the real world were hilarious. I loved Asbi's supermarket and Harry Handsome, the vain and sickly sweet popstar who turns out to be crucial to the plot in the most ingenius way. The shape-shifting is both gross and strangely satisfying and the villain is full of dark comedy. Fluffy provides the essential 'cute space pet' status and all is set for a riotous and epic adventure.
I also loved the family dynamics which ran throughout the novels. The families are anything but conventional but are nonetheless filled with love. Jasper may have to come to terms with having two different families in two different galaxies (and from two different species) but varying family set-ups will not be alien to many young readers and the relationships between Jasper and Holly, Bill and Mary and his birth parents are touching. Even the biological changes that Jasper goes through with his shape-shifting may seem rather extreme but will be relatable to the pre-teen age.
I highly recommend this series, which is left open-ended and set to continue. It completely won me over with its outer-space comedy, its pace (across space), and the outer-this-world, squelchy plot.
A shooting star of a novel!
at August 03, 2020