Return to Roar by Jenny McLachlan and Ben Mantle 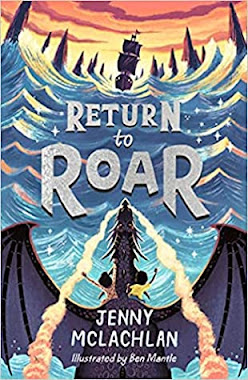 After twelve months of excitedly waiting, this is an extra special review for me. Not only because I loved the first instalment of The Land of Roar so much that I could barely wait for the sequel, but also it was the first book I properly reviewed on this blog.  The Land of Roar still remains one of my favourite books I read last year and it's definitely back with a bang!

When Arthur and Rose return to Roar for half term, they plan on celebrating life without villainous scarecrow Crowky on the prowl. But when a sinister message is left outside Winija's cave, it appears that Crowky is very much around and hunting for a terrifying, long-hidden secret that could make all Arthur and Rose's nightmares come true.

To stop Crowky uncovering their deepest fears, Arthur and Rose must journey beyond Roar to 'The End', an unexplored and unknown place. With allies in tow, they battle through ice and snow only to unearth some deadly enemies. But what exactly is their main threat? Crowky? Hattie Skoll and her wolves? Or the fears inside themselves?

Jenny McLachlan brings all the familiarity of Roar back to us in this novel (hooray) but quickly takes us beyond the boundaries of the last story and into the fresh, iced territory of 'The End'. The beautiful but rather bleak landscape is brightened with brilliantly bright characters (old and new), pacey adventure and bags of humorous dialogue.

Once again, the novel encapsulates the very essence of children's imaginary worlds; furry whales, blue unicorns, on-off waterfalls and pic-n-mix by the bagful which gives it a frothier, lighter feel to other books in its genre. However, if you think that means that the plot isn't going to be gripping then think again. The threats are hair-raising, the emotions run deep and the second half of the book has a much darker feel than the first.

As well as a dynamic plot, McLachlan allows us to get to know Arthur and Rose on a much deeper level in this second instalment. Having made the move from primary to secondary school, the twins now have much bigger issues to face. Interestingly, Arthur, who narrates the story, is a much stronger, more together character as he makes his return to Roar, although he remains haunted by one dominant fear. Yet Rose's character, which I previously found rather dominant and unyielding, is peeled back and explored in a sensitive and empathetic way and highlights the impact of bullying on a seemingly confident person.

Crowky remains a loveable and brilliantly sinister baddy and yet remains relatable through his childlike qualities. The friendships are strong and endearing and the magic just crackles around you as you read. Ben Mantle, one of our family's favourites, brings the characters and landscape to life with his unique touch and extraordinary cover, adding a deeper sense of enchantment and awe to an already fantastical read. Roar is truly a delight - a Peter Pan type world that represents all those magical, secret places that exist in the hearts and minds of us all.