If You See a Lion by Karl Newson and Andrea Stegmaier 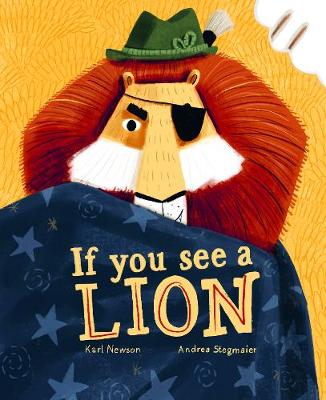 Link to Waterstones
Link to Hive.co.uk
Published by: Quarto, August 18th 2020
👍👍👍👍
If there is one thing I have learnt from Karl Newson's 'I am a Tiger' series it's that his picture book characters are packed with personality, punch and an awful lot of ROOAAAR! But this cunning fellow, so big and bold that he fills the whole front cover and many of the pages inside, has a BITE to match.
"Once upon a time there was a story in this book...But a lion ate it all." That's not the only thing he's keen on eating until he has a meeting...
with a brave little rabbit who knows EXACTLY what he's up to...
Being eaten won't stop this rabbit from teaching lion a very important lesson...
This book is as unpredictable as the lion itself. It's complex and brilliantly written rhyme creates an unsettling effect which makes you instantly wary of this shady, fearsome character...
which is exactly what lion wants. There's not even any speech marks so this lion is breaking all the rules...or is he just acting as a lion is expected to act?
Rabbit acts as the perfect antithesis to lion. Lion appears to rule the roost but it's small, bold, no nonsense rabbit who has all the answers. He certainly gives Lion plenty to think about, mainly that he can choose who he wants to be, rather than playing to stereotypes. And life is
so much better when you're not gobbling everything up.
The pictures by Andrea Stegmeier are splendiferous. Lion practically jumps off the page and is instantly distinguishable from all other lions I have seen in picture books. The limitless list of what the lion eats adds bags of imagination and humour and encompasses all the familiar things we love to see in a story; wizards, rainbows...sprouts?
The tone and feel of this picture book is so unique, it may take a few reads for little ones to work out all that is happening- but that's the joy of reading isn't it? It was a more challenging text for my five year old to get his teeth into and it evoked a lot of fun observations and questions.
"Once upon a time there was a story in this book..."
and we happily devoured it!
If you see a lion is available to buy from tomorrow, August 18th 2020.
at August 17, 2020