LAST: The Story of a White Rhino by Nicola Davies 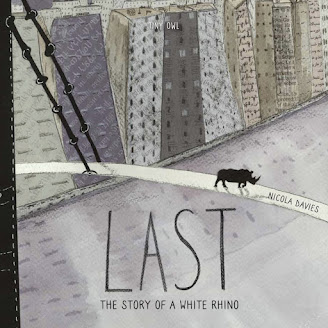 Link to Tiny Owl Publishing
Published: August 2020, Tiny Owl
👍👍👍👍👍
We love Tiny Owl books in our house and this new release was one I was very keen to share with all three of my children as wildlife conservation is an issue that has always been close to my heart. It didn't disappoint. Last: The Story of a White Rhino, which is based on the true story of Sudan, the last male Northern White Rhino, is poignant and beautifully understated.
When a young rhino witnesses the death of his mama and is taken to a city zoo, the bleak loneliness of his situation makes him wonder what has happened to the world. Fearing he is the last of his kind, he sinks into a grey despair. But hope may be hidden just round the corner. Will this rhino get to see home again?
Nicola Davies tells the story through the eyes of the rhino himself, creating an instant impact. His simple words say it all, expressing first the despair and then the hope for his species and many others. Humans are the cause of his plight and yet also the possible answer. Readers will have to decide which future is the one they will fight for...
Nicola Davies is an established author but this is her debut as an author/illustrator and the pictures are stunning. With the words providing the framework, the illustrations provide a stark contrast between the old world and the new. The page depicting the death of the rhino's mama made a deep impression on all of my little ones - their wide eyes and open mouths showing their shock and disbelief at the cruel reality. Through this story, Nicola Davies evoked in them a passion for this magnificent animal and they had a barrage of questions about the real story.
Attention to detail in the illustrations adds extra layers to the story. For example, before the actual tale begins, Nicola Davies talks about how and why she added words to the animals and buildings - words which are presented in a range of different languages. This sums up the point that although this is a book, beautifully paired back in it's simplicity, the issues within it are deep, complex and emotive and  crucial to raising awareness of conservation.
I can't recommend this book highly enough for schools, families and anyone with a deep love of animals, the planet and the future which awaits the upcoming generation.
at August 14, 2020