UPCOMING RELEASE: Kidnap on the Californian Comet by M.G.Leonard and Sam Sedgman, illustrated by Elisa Paganelli 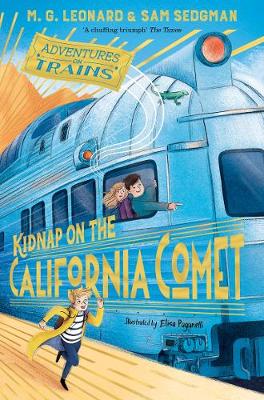 TOOT TOOT! It's been about six months since I read and reviewed The Highland Falcon Thief, the first release in the new Adventures on Train series by M.G Leonard and Sam Sedgman and brought to life by Elisa Paganelli. This has honestly been one of my favourite books of 2020 and so I jumped at the chance to view the second instalment via Netgalley.

All aboard the Californian Comet - ready and waiting to take you on an exciting trip across the USA. Hal can't wait to join his Uncle on a second rail adventure but his uneasy feeling that something isn't right proves true when his new friend and daughter of business billionaire, August Reza, is kidnapped. Armed with his sketchbook and some magical assistants, Hal tries to piece together some increasingly confusing clues but time is running out. Can he stop the kidnappers in their tracks or will his detective work be derailed?

This sequel is every bit as exhilarating and as charming as the first but on a grander scale and with higher stakes. M.G Leonard and Sam Sedgman's detailed knowledge of trains and specific research of the American coast to coast rail journey brings the story to vividly life - from the dramatic scenery to the sights, sounds and smells of life aboard a moving locomotive. The characters are wide-ranging, fun and larger than life and the mystery has enough twists and turns to make the unravelling journey satisfying, even if you manage to solve some clues along the way.

Hal, once again, makes a likeable, determined but frustrated protagonist. This time we know the answer to the kidnap lies somewhere in his sketchbook, but this element of the storyline makes it both fascinating and unique in its USP. 'Sherlock da Vinci' is on a mission and he is going to use his skills to the best of his ability.

I loved the character of Lenny in the Highland Falcon Thief but I think I liked Hadley and Mason more, with their American exuberance, impersonations and magic tricks. The theme of magic subtlety runs through the novel and becomes pivotal to the plot. The plot in itself is pacey and perfectly executed and, just as in the last book, there is a lovely mix of adult and child characters. Uncle Hal is his casual and supportive self but brings gentle back-up to the table when needed whilst Zola, Vanessa, Adie, Hadley and Marianne are super sharp and sassy female characters - although maybe not all good!

The writing style feels effortless and, for me, is as enjoyable as the story itself. It's tone and language flows as easily as the Missouri river, making the story accessible and easy to read. Before you know it, you've rattled from chapter to chapter as quickly as Hal races from carriage to carriage and are faced with another dramatic, nerve-shredding end alongside surprising revelations. The illustrations bring warmth and familiarity and Elisa Paganelli captures the characters brilliantly.

You don't have to like trains to enjoy this series but be prepared to have your mind changed. I may not be an expert on railways but I instantly wanted to go on this train journey. In fact, it's now on my bucket list, even I won't be doing it aboard the Silver Scout. What I'm trying to say is that this book has something for everyone; trains, scenery, sketches, mystery, magic and adventure. I'm thrilled that there's more on the way...

Murder on the Safari Star publishes in February 2021.

A big thankyou to Netgalley and Pan MacMillan for allowing me to review this book.