UPCOMING RELEASE: The Boy Who Met a Whale by Nizrana Farook 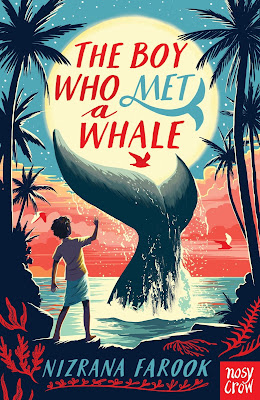 Link to publisher
Published by: Nosy Crow, 7th Jan 2021
👍👍👍👍
Last year, Nizrana Farook's debut novel, The Girl Who Stole An Elephant , set on the Sri Lankan island of Serendib, won my heart with it's strong female lead, it's thrilling plot and beautiful setting. So much so that when my pre-order of The Boy Who Met a Whale dropped onto my doorstep a little bit early, I couldn't help but dive right in.
When Razi discovers washed up stranger, Zheng, on the beach, he and his sister Shifa are plunged into an unexpected and dangerous adventure. Zheng, a boy full of incredible stories, claims he knows the whereabouts of a valuable, stolen dagger. But when he is captured by two unsavoury characters, who are also hot on the trail of the dagger, Razi and Shifa head out into the ocean to help. Very soon they run into trouble. Is there any creature out there who can save them?
This novel is a sizzle of sunshine in a currently dark world. As with The Girl Who Stole an Elephant, Nizrana Farook immerses the reader into a fast-paced adventure from the word go. In this story, the danger is palpable and there are barely any breaks in the tension as Razi, Shifa and Zheng lurch from one disaster to the next. From the very first page, the storytelling is enthralling and I loved how the high stakes are balanced with gorgeous descriptions of the whales, the turtle and the stunning coastal beauty of Serendib- all of which are play a crucial role in the adventure.
Strong themes are explored in this story: the moral code of right and wrong, the concept of family, the challenge of facing fears and the impact of grief. Razi and Shifa are struggling to come to terms with the death of their father whilst Zheng is struggling to come to terms with the death of his beloved captain. This greatly affects the decisions they make throughout the novel and strengthens the special bond which forms between the three of them.
I found the villains, Marco and Cook, instantly aggressive and intimidating. This took me back to my childhood days of reading 'The Famous Five' and 'The Secret Seven' where the 'baddies' often took the form of surly, ruthless adults. In fact, with islets and boats and picnics and treasure maps, this whole adventure resonated warm echoes of these much loved tales, but with a truly glorious setting that will make you want to dive into turquoise seas and soak up the sun.
The Boy Who Met a Whale is released on 7th January - a short, sharp, snappy, stunning read.
at January 04, 2021