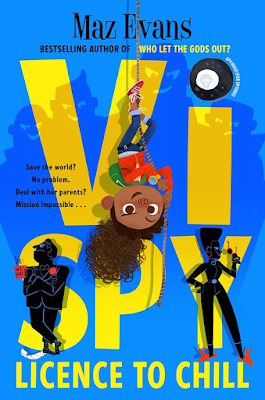 I have a shock announcement! I have never read the best-selling Who Let The Gods Out? series by Maz Evans. I know, I know, I should be eliminated as a teacher, blogger and supposedly avid reader. However, I have had the pleasure of reading The Exploding Life of Scarlett Fife and have heard so many wonderful things about the Maz Evans herself that this was a middle grade I was super excited about. I was right to be. Spoiler:This book is BRILLIANT!

When Vi (Valentine Day) discovers that her mum is a super-spy and her estranged dad is a super-villain, her world is turned upside down. Determined to follow in her mother's footsteps and become a spy, Vi sets out to find herself a mission. But it already looks like a mission has found her. Whilst the mysterious Umbra is dead-set on revenge against her family, Vi must also navigate the challenges of divorce and new beginnings...

This highly original novel is hilarious from start to finish and will EXPLODE the mundanity of your lockdown. It offers fast-paced action, tension, excitement, giggles on every page and characters that are as vibrant as the first daffodils of spring. The cast is incredible-from Vi herself to spunky nan to Siren, the femme fatale with serious BO. If there was an award for the best named characters, Vi Spy would win it hands down: Valentine Day, Easter Day, Independence Day...it's just fabulous. What I loved most, however, was that the quieter characters, Russell Sprout and Mr. Sprout, were still allowed to shine as much as the rest of the cast and were valued for who they were and what they brought to the high octane, highly chaotic mission.

Vi makes for a great main character. She's determined, confused and has a strong sense of right and wrong. However, the way she struggles with what she should do compared to what she wants to do is completely relatable. Her scenes with Tom, Sally and Russell show her inner struggles brilliantly and yet, away from their influence, she is not afraid to take matters into her own hands - watch out for the scene at the arcade. However, it's her burgeoning relationship with Russell that really endeared her to me- oh and with her nan, of course.

As well as having a gripping, dynamic and laugh-out-loud plot, Maz Evans deftly tackles big themes in this book. While the OAPs are living it large, Vi is struggling to adjust to her new blended family whilst playing piggy in the middle to her parent's acrimonious divorce. Meanwhile, poor Russell is repeatedly let down by his mother whilst trying to dodge the school bullies. There's a big pay-off at the end for Vi's family though and it is lovely to see their new family set-up portrayed in a strong and positive way.

Every chapter of this story offers a fantastic balance between the ordinary, the weird and the wacky and the completely outlandish. From dodging homework and Mum's cooking to cannon-firing mobility scooters to a two-headed villain to a bat that is trying to stay on the straight and narrow, there is no guesses what's coming on the next page. What I will take a guess at though is that Vi Spy will be back for a sequel (well it better be!) but not soon enough...