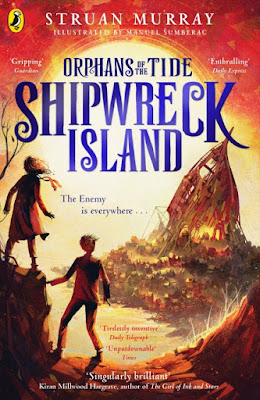 The sign of a good novel is surely one you can't put down. Another sign must be that, when the postman brings the sequel to that novel, you drop everything and dive right in.

That was me with Shipwreck Island, the much awaited follow-up to Orphans of the Tide, which won the Bath Children's Novel Award in 2017.

Ellie and Seth have escaped The Inquisition in The City and sailed the ocean to find a new home. When they arrive on a tropical island ruled by a highly-praised queen, it seems their wishes may have come true. But under the surface trouble is brewing and it's clear that the past is not going to let them go...

When I read and reviewed Orphans of the Tide, I was under the impression it was a stand alone novel and felt the ending hadn't quite been wrapped up. What a good job it wasn't! The sequel is as breath-taking as the first and it was wonderful to return to Ellie and Seth's world.

For me, the big draw of this series is that both Ellie and Seth are loveable but complex characters with the weight of the world- or the Enemy- on their shoulders. Ellie distinct personality, strength of mind and love of inventing has meant she has taken her place as one of my favourite protagonists in children's literature, alongside the likes of Lyra Belaqua and Katniss Everdeen. However, although not as present as in the first novel, it is The Enemy that steals the show. Deliciously smug and manipulative, this is a villain like no other I have come across and Ellie's internal battle to rid herself of him is both enjoyable and gripping.

If Ellie's relationship with Seth and The Enemy isn't challenging enough, her new friendship with Kate brings a whole extra dimension to this story. Kate is another complex character, tricky to pin down and keeps readers guessing right to the end of the novel. I also loved feisty Viola and the cleverly created character of Molworth brings a touch of humour and lightness to a heavy storyline.

There are some hard-hitting themes in this novel. Friendship, loyalty, love, loss and the power of choice is explored alongside temptation, manipulation and the battle for power and control. Rich versus poor also features heavily as well as truth versus lies. Murray unravels a nail-biting plot with perfect skill and timing. As with Orphans of the Tide, the narrative is broken up with diary extracts, creating intrigue and an extra layer to what is already fantastic storytelling.

There are very few comparison texts I can liken this series to. It is stand-out because of it's uniqueness, strong concept and brilliant execution. Suitable for upper middle grade, teen and competent readers, this is perfect for readers who like grit, thrilling adventure and a touch of menace. Prepare to be enthralled...