Upcoming Release: Wee? It wasn't me! by Clare Helen Welsh and Nicola O'Byrne 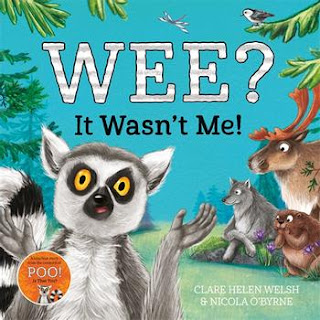 When Poo! Is that you? arrived in our house last July, Lenny the Lemur, with his hilarious expressions and endearing character, was an instant hit. And now he's back in Wee? It Wasn't Me! Hooray!

When Lenny ventures to Alaska on holiday, it isn't long before he slips in a puddle of piddle. But which animal is responsible for it? Lenny is not going to stop until he finds out but will he get more than he bargained for?

This beautifully illustrated narrative non-fiction book is the perfect sequel to Poo! Is That You? It follows a very similar format to the first in the series, but is set in an exciting new location with a whole host of exciting new characters. Nicola O'Byrne's illustrations of the Alaskan scenery are exquisite and every animal jumps off the page. (Let's just hope their pee doesn't.)

Once again, Lenny's character shines through as he leads us through an entertaining and informative story about the different ways animal's wee. It's funny and yucky with a great twist at the end. Clare Helen Welsh brings the story to life with strong alliteration and delicious repetition. Wee? It wasn't me! Then who was it? It seems Lenny is about to find out...Eek!

There's some great facts at the back of the book in addition to the very interesting facts that are littered throughout the story. It is perfect for any reader who loves animals, the great outdoors and, of course, the ever popular toilet humour. However, instead of the joke being on him this time, it seems that Lenny might just get the last laugh...

Who knows where he may pop up next!

Lenny's hilarious antics are available to pre-order and is out in the world on 1st April.