There have been so many superb middle grade releases this summer, it's been really hard to keep up. I've tried hard to stay on top of my 'to be read' pile but the truth is, it's now taller than me!

What I have been spoilt by, however, is the return of some absolute favourites. Sequels that I just haven't been able to resist because the worlds are just so magical and enchanting. And they certainly haven't disappointed! From vengeful fairies to vanishing rooms on a ship to mysterious jinnis in a desert, these books are pure escapism...

The Battle for Roar by Jenny McLachlan, illustrated by Ben Mantle 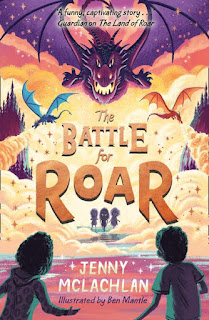 This is the book I wanted to read as a child. It's the world I wanted to go to and its the adventures I wanted to have. Jenny McLachlan's imagination has everything a fantasy reader could want: paradise islands, a ninja wizard who can conjure marshmallows, flying dragons, a mermaid best friend and a playground island built by fairies... Just don't expect everything to be quite as it seems.

Rose and Arthur are returning to Roar! This time they're sailing past The End with Win and Mitch on an expedition of a lifetime. But Arthur is uneasy. Crowky appears to have gone for good... but has he really?

Everything seems fine until a mysterious and magical storm descends on the ship. Soon, the crew have more to worry about Crowky. Someone's out for vengeance and they won't stop until Roar is destroyed...

This series, for me, has always had strong echoes of Peter Pan. Its childhood innocence and the celebration of all things joyous is both delightful and magical to read. And yet lurking in the shadows are all the quirky things that a young child finds scary: Crowky, Bendy Joan, an enormous cat..., all of which give the story a creepy and unsettling edge. The plot is unpredictable and inventive and the new settings keep the story fresh and exciting.

With only Rose, Arthur, Win and Mitch at the core of the action this time, Jenny McLachlan creates a fabulous and tight dynamic between the four, punctuated with sharp dialogue and humour. Most of my favourite lines were between Win and Mitch and the ninja wizard really steals the show in this book. As a result, the overall mood of the novel is kept fun and light-hearted, even through the darkest parts of the adventure. That doesn't mean that there isn't plenty of drama and seriously high-stakes though, because there is. The question is, will Roar survive?

Woven through the plot are themes of friendship, teamwork, survival and right and wrong. There's lost girls, a ninjabread army (utterly brilliant!), dragons, fairies and mermaid hot tubs. The description of the food is mouth-watering, the weather delightful and the illustrations by Ben Mantle simply a joy. On top of all that, the end is as twisty and turny as the tide, but whether it's a happy one for Arthur, Rose and Roar, I couldn't possibly say... 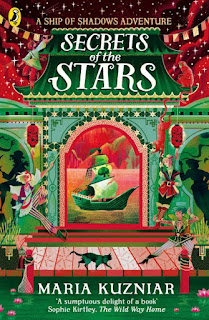 This magical series about a band of female pirates is rich, intoxicating storytelling at its best. Join the pirates as they travel across the globe on The Ship of Shadows, a vessel steeped in secrets, shadows and sorcery...

The race is on to find the second piece of the map that Captain Quint so desperately craves. But crucial pieces of the puzzle are alluding Aleja, leaving her frustrated and confused.

When she starts having strange visions, Aleja becomes convinced that somebody is trying to tell her something. But tensions are running high and time is running out. Can Aleja lead the crew to the map and prove she's a worthy pirate?

Reading this sequel was like returning to a family and a much-loved home. The descriptions of the ship are so vivid you can almost smell the salty sea air and hear the deck creaking. There's a deep sense of magic and mystery lurking below deck but also a playfulness, with its appearing and vanishing rooms (I loved the pub!). Most of all though, Maria Kuzniar makes the pirate ship feel like the comforting, safe haven we all crave.

There's a real grown-up edge to this book. Unlike Rose and Arthur in The Battle for Roar, who are returning to the imaginary land of their early childhood, Aleja finds herself in a deadly world of pirates and assassins, about to undertake a secret quest of epic proportions. There's battles and weapons, storms and heists and, as Aleja discovers, absolutely no room for error. Yet again, Kuzniar makes this cut-throat crew feel like family. There's a wonderful, funny and touching dynamic between Aleja and Frances, romance and relationships, pets and pet shadows and, of course, the ever-present and comforting presence of cake!

The danger, however, is real. With tigers, hot-air balloons, icy lakes and a ruthless enemy, these pirates live on the edge of survival. If you like your magic edgy and combined with ocean voyages and adrenaline-fuelled action, then this is the book for you. It sits at the more confident end of middle-grade readership but is completely encapsulating. Every single sense is engaged as you read and the layers of the plot are meticulously planned. Here's hoping that, with two more pieces of the map to find, the journey isn't over just yet...

Moonchild: City of the Sun by Aisha Busby, illustrated by Rachael Dean 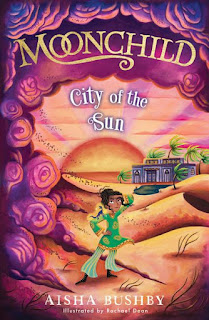 Moonchild: The Voyage of Lost and Found grabbed me in 2020 with its rich imagery, intriguing story and highly distinctive narrative voice. Told out of sync and peppered with fables and stories within stories, this is high-concept storytelling that works.

The adventure continues with Farah's story. Since the Moonchildren unlocked the moon magic, the world has become dangerously unbalanced. With daytime disappearing completely, Farah and Amira travel deep into the desert to find the City of the Sun and the answers they seek...

Inspired by Arabian Nights, this is an intoxicating story of friendship and bravery. The storytelling brings the reader's senses to life and the visual imagery is stunning. The plot, to me, felt fresh and unique and I loved the relationship between the character's and their jinnis.

The stakes are incredibly high in this sequel. Time is of the essence and that adds a real drive to the tale. Aisha Bushby showcases her imagination with brilliant settings and I adored the City of the Sun. It's the perfect length for the slightly younger end of middle-grade readership but for anyone struggling with the initial jumping around of the story, stick with it, it's totally worth it!

There's a lot of pearls of wisdom within the pages of this book and it does feel like a twist on a classic. The story is timeless and magical, beautifully told, with strong characters and I'm not sure we've seen the end of them yet...