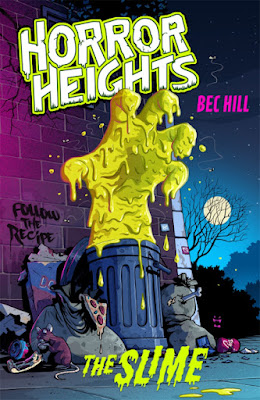 It's been a little while since I came across a creepy, spine-tingling story aimed at lower middle readers, but this brand new series written by comedian and CITV presenter, Bec Hill, is the new Goosebumps. Perfect for readers that love a creepy story but who want to avoid anything too scary, the first book in the series, The Slime, is a funny, hair-raising tale with teeth...

Connie doesn't know what her talent is, so when she takes some slime into school and is nicknamed 'The Queen of Slime', Connie thinks she's found her identity. But when she has no choice but to make her own slime, things take a sinister turn. Emerging from the bin comes BIG, a super sweet slimy blob that wants nothing more than to be Connie's friend. But Big is growing at an alarming rate and so is his personality. Soon, he wants Connie all to himself and she's never needed the help of her friends more...

This story is easily accessible with lovely short chapters and a whole load of character. Big is a great, slow-build villain and the tension and creepiness escalates brilliantly through the story. I really related to Connie's feelings of inadequacy as she compared herself to her friends and her subsequent search for identity.

The plot is simple but engaging and, as you would expect with a creepy tale, there are some great cliff-hanger endings to the chapters. Bec Hill captures the world of a late primary-schooler incredibly well and plays on the current popularity of slime to build a chilling story. There's a fair bit of toilet humour-which will be marmite for readers-and a very fun twist at the end.

With books 2 and 3 due out in 2022, the premise for the series comes from the mysterious setting-a town dubbed Horror Heights. Each book will follow strange events which unfold on the same weekend and happen to children all from the same class. So which of Connie's classmates will be the next in line for a creepy encounter...? You'll have to wait until April to find out.

A big thanks to Hachette for granting me a review copy. Horror Heights:The Slime is available to buy from 30th September.