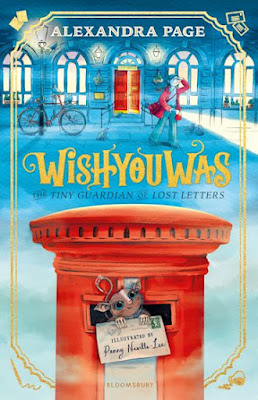 Nothing seems to go straight to our hearts more in stories than adorable furry characters. From Winnie the Pooh to Paddington to Stuart Little to even The Gruffalo and The Tiger that Came to Tea (okay, maybe not so adorable but definitely adored), these timeless characters will ever be etched in our memories and still raise the fondest of smiles in years to come.

Well, meet a new addition to the 'adorable' clan. Debut author Alexandra Page, alongside Penny Neville-Lee and Bloomsbury, presents to you Wishyouwas, a second-class gatherer who lives below the streets of London with his huddle of Sorters-the guardians of lost mail.

It's Christmas in 1952 and the streets of London are shrouded in smog. For lonely Penny Black, the festive season is looking bleak, until she meets an unusual talking creature in her Uncle's post office.

Wishyouwas is looking for lost letters. As he introduces Penny to the Sorters' secret world below the streets, Penny is desperate to become part of it. But humans and Sorters don't mix and big trouble is lurking. Not only is Stanley Scrawl-the Royal Mail rat-catcher-determined to ruin the Sorters' secret existence, Penny must work out whether she even has a place amongst them.

This is the most wonderful Christmas story, without being overtly Christmassy. Perfect to be read all year round, you won't want to let this world, with it's glorious characters, go. Alexandra Page effortlessly mails us back to 1952 when smog filled the streets, the Queen was new to the throne and letters were of the utmost importance. Even though this is post-war Britain, the novel still has the classic feel of Carrie's War, Letters From the Lighthouse and other brilliantly told historical novels.

The story itself is charm personified from the first page to the last. The characters are gorgeous and the high-action plot, with it's desperate stakes, is twister than London's underground tunnels. Penny is an isolated, curious and relatable heroine with a caring heart, a strong moral compass and post bags of bravery. Wishyouwas is hopeful, warm and endearing and don't be fooled by Stanley Scrawl who conceals the depths of his evilness as effectively as the smog. As for the other, geniusly-named, Sorters- well you'll probably all have your individual favourites, but ThisWayUp particularly earns a stamp of approval from me.

The Sorter's world is highly imaginative and brought to life with exceptional detail. Still, the London setting keeps us grounded in a believable reality. It's magical without being 'magic', it's warm without being sickly sweet and the tears will creep up unexpectedly through the smiles. The Sorter's underground world is vivid, full of heart and yet so full of industrious (and serious) business, you can't help be amused by it. Just watch out for the compass point. YOUCH!

Overall, this is a cracking debut with all the makings of a classic. Even better, there's going to be a sequel! All I need now is for someone to write me a letter that gets lost so a Sorter, preferably Wishyouwas, can deliver it. Now what are the chances in this day and age...

Wishyouwas is out now and available to buy from bookstores and online.