Monster Doughnuts: Cyclops on a Mission by Gianna Pollero, illustrated by Sarah Horne 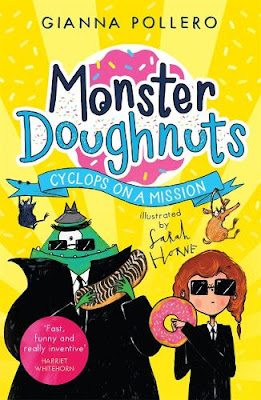 Monster hunting and baking merge together (again) in the second book of The Monster Doughnut series: Cyclops on a Mission. With a fabulous cast and hilarious plots, these books are well worth gobbling up.

There is a devilish Bottom Biter in town and Grace and her family must team up with the 360-year-old  cyclops, Mr. Harris, to track him down. While they're at it, what on earth has happened to the head judge of a popular TV show? Can Grace keep Mr. Harris focussed on the task and stop him eating all the buns? 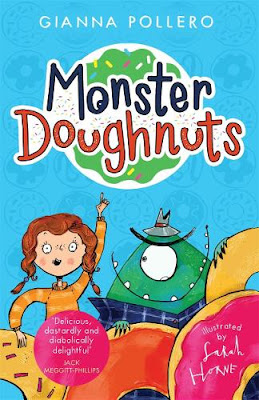 Monster hunting books seem to be popular recently, but this series has really stood out to us. The narratives are as attention-grabbing as the colourful front covers and the plots are fast-paced, entertaining and brilliantly wacky. The world-building concept is simple: there is our world and Monster World and the monsters keep escaping through gateways into our world, causing mayhem.

Combining hunting monsters with cake-baking (cakes are the best weapon for dealing with monsters due to that sneaky ingredient, baking powder), is the USP that makes this series a winner. But the recipe for success doesn't stop there. Mr. Harris is an hilarious character, who balances out the more serious Grace, and the range of monsters - both good and evil- show off Gianna Pollero's fantastic imagination. We loved that Mr. Harris has now changed from being the villain to an unpredictable and outrageous hero and the new addition of Kenny is a stroke of genius, as he brings some adorable 'cute creature' action. It feels as though Mr. Harris has muscled in on Grace as the main character, but it completely and utterly works. The dialogue is hilarious and what's even more exciting, is that there is still plenty storyline to explore.

So...bring on book 3! A big thanks to NetGalley for allowing us to read a review copy. Monster Doughnuts: Cyclops on a Mission is now available to buy.