The Lost Whale by Hannah Gold, illustrated by Levi Pinfold 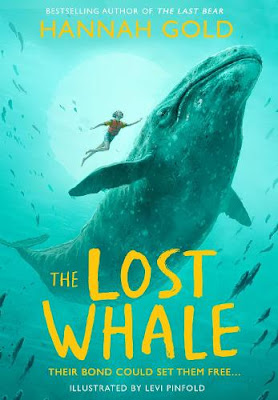 Link to publisher
Published by: HarperCollins, 31st March 2022
👍👍👍👍👍
A year ago, I had the pleasure of reviewing The Last Bear via Netgalley and - WOW! - what a read it was. Now winner of the 'Best Story' in The Blue Peter Book Awards 2022, the stunning novel, with its beautiful design and powerful message has moved readers of all ages, leaving a lasting impact.
Could it be possible, then, for the author and illustrator to weave the same extraordinary magic again? Well, the answer, for me, is absolutely yes. For a year later, The Lost Whale has moved me in exactly the same way and possibly even more than The Last Bear did and is another example of hauntingly brilliant storytelling.
When Rio arrives in California to stay with a grandmother he barely knows, he feels alienated, angry and alone. His mother is in hospital in England and he doesn't know how to save her. But when Rio meets Marina and her father, his world changes. For out there on the ocean, there's an exhilaration and freedom he's never experienced before and the most beautiful creatures he's ever seen...whales!
But after Rio establishes a special connection with the grey whale, White Beak, he's distraught to discover she's gone missing. Using his unique gift of communication, can he track her down and save her in the same way he wants to save his mum?
As with The Last Bear, this is also a story about connection; connection with the planet, connection with the beautiful creatures on the planet and connection with other humans. Just like April lost her connection with her father, Rio has lost the connection with his mum, taking her out of his reach. Through Rio's anger, loneliness and grief, Hannah Gold poignantly explores issues of mental health and what it is to be a young carer and cleverly aligns his emotion with the plight of the planet and White Beak.
Hannah Gold's storytelling is wonderfully skilful and yet she makes it look effortless. The short chapters keeps the story bobbing along blissfully, building to a high-action, high-stakes ending. Complimenting Rio's raw emotions is the lovely steady and confident Marina who, along with her father, nurtures her new friend with genuine warmth. I particularly loved that there was more adult involvement in this novel and Rio's relationship with his awkward grandmother is a heartwarming thread to watch out for. Also, while there was a slight fantasy edge to The Last Bear in terms of April's relationship with Bear, this novels feels very much grounded in reality, although Rio's gift is what makes him particularly unique as a character.
The message of the novel is as sharp and impactful as in The Last Bear. There is a strong eco warning about the state of the planet's oceans, the extensive dangers posed to its creatures and the consequences we are facing. Yet, again, this message doesn't feel didactic because, through Rio's story, Hannah Gold makes us care! Witnessing a whale's battle first hand is a powerful thing and yet, within the story and in the end notes, Hannah promotes the positive ways we can help - both collectively and individually. But there are other takeaways from the novel too as Hannah Gold explores Rio's internal change, with the help of his family and friends, towards responsibility and acceptance and liberation from the chains that bind him.
Whether or not you've read The Last Bear, this isn't a novel to miss. It's equally as raw, wild and powerful but also as warm as the Californian sunshine that beats down on the story, enticing us to escape onto the ocean. The illustrations are stunning and readers are in for a real treat of an adventure.
The Lost Whale is available to pre-order and out to buy on 31st March 2022. A big thanks to Netgalley and HarperCollins for allowing me a review copy.
at March 22, 2022