Yesterday Crumb and the Storm in a Teacup by Andy Sagar 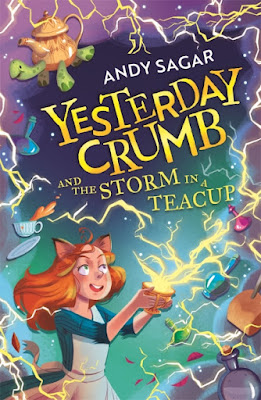 Boiling the kettle and settling down with a cosy cuppa to read felt particularly apt as I began the first book in this new fantasy MG series. For, just when you think you've read everything to do with witches, here comes Yesterday Crumb - a tea witch in the making - with a story that will blow you away but which also feels like a 'hug in a mug'.

Yesterday Crumb has grown up in a circus cage, ridiculed for her fox ears with no idea who she is. But when a witch's familiar breaks her out, Yesterday discovers not only that she's a strangeling, but that the evil Mr. Weep wants to destroy her new life.

Taken in by a magical tea witch Miss. Dumpling, Yesterday starts to explore her powers. But with Mr. Weep's hold over her growing stronger and her witch's license in danger of being refused, Yesterday must summon a storm and fight for her life.

This is magical fantasy at its best and a wonderful new take on a witch story. Andy Sagar's imagination is second to none, the characters are gorgeous and the tea and cake is...well, simply sublime! For me, the plot combined a nod to some of the best stories in children's literature - The Snow Queen, The Wizard of Oz, The House with Chicken Legs and even Philip Pullman's His Dark Materials trilogy - with something truly fresh and orginal. Dwimmerly End feels like a cosy, safe version of Hansel and Gretel's gingerbread house and Miss. Dumpling is possibly my new favourite character of all time.

The story is charm personified but not too sugary sweet. Like a lot of Yesterday's brews, it has a bitter edge to it which makes the plot compelling and addictive. Yesterday is endearing and timid but, as she comes to the boil (in Miss. Dumpling's words), she unleashes a daring dark side with a tornado of power. The word building is wonderful and again mixes cosy fluffiness with shadow and shade, heartbreak and grief. In my personal opinion, though, it is the magical tea brewing which is the star of the show and the USP that will make me first in the queue to refill my teacup the moment the sequel comes out.

So if you're looking for a marvellous, magical tale that balances comforting charm with danger and adventure, then this is the book for you. Brew the tea, cut the cake and snuggle down for a real treat!

Yesterday Crumb is released in the UK tomorrow, March 17th 2022. A huge thanks to Netgalley and Hachette for allowing me a review copy.