The Royal Leap-Frog by Peter Bently and Claire Powell 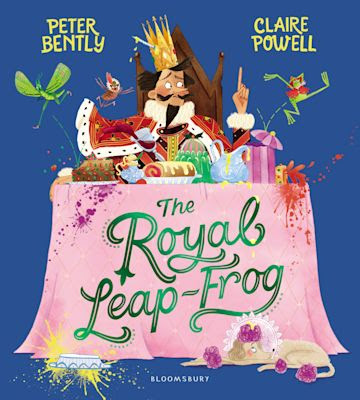 Spring is well and truly here and in our gardens wildlife and bugs are stirring, ready for a season of hopping and bouncing around. But I bet they're not half as bouncy as the characters in this new picture book release, written by Peter Bently and illustrated by Claire Powell, which features a grasshopper, a flea and a frog.

When an argument breaks out between a grasshopper and a flea over who can jump the highest, they decide that only the King can settle the matter. Accompanied by a frog, they set out to the palace and unleash an hilarious chain of riotous chaos that dismally fails to impress His Majesty. But who will have the last laugh by leaping the highest?

This is a comical caper of a story, vibrantly illustrated and full of fun. Peter Bently's fabulous rhyme and rhythm is, as always, on top form, making the tale bouncier than the grasshopper, flea and frog put together. Despite being small in size, the characters are larger than life and full of so much energy, it makes the story zing!

Claire Powell's illustrations are both joyous and hilarious, portraying the slapstick humour of the text brilliantly. And yet, the story's climax hinges on a cleverer form of humour - a pun. The fact that this picture book is a innovative play on a joke not only makes for an unexpected but laugh out loud ending, but it also champions the underdog...or should I say the underfrog...

So, if you're looking for something light-hearted and frivolous but which also has the feel of an Aesops Fable crossed with a joke book, then this is the book for you. Little ones will love both the creatures and the comedy and will be bouncing up and down for you to read it over and over. Just don't let them leap too high!

The Royal Leap-Frog is released tomorrow, April 14th 2022. A big thanks to NetGalley and Bloomsbury for allowing me a review copy.