The Strangeworlds Travel Agency: The Secrets of Stormforest by L.D.Lapinski 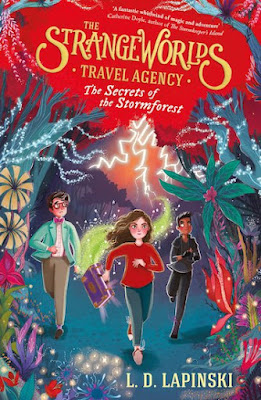 Link to publisher
Published by: Orion Children's Books, 14th April 2022
👍👍👍👍👍
There are risks aplenty and more worlds in danger as L.D Lapinski transports us across the multiverse in the final instalment of The Strangeworlds Travel Agency series. Arriving on the 14th April, this is an epic ending to what has been a fantastical, magical and enthralling read.
When Flick discovers the real reason why the whole multiverse is on the brink of collapse, she, Jonathan, Avery and her long-lost grandfather set out to save it in an urgent race against time. But the enemy they're up against is powerful and Flick will have to unlock the secrets of more undiscovered worlds and rely on alliances, past and present, to give herself and her friends any chance of surviving. Could this really be the end of...everything?
After having the privilege of reviewing both book 1 and book 2 in the series, this third novel doesn't disappoint. Throwing us into the thick of Flick's family history and the fragile future of the multiverse, the initial, carefree 'kid in a sweetshop' travelling days of the first book are long over. Now we are immersed in a dark and perilous journey where everything is at stake.
This is a book of revelations. The true enemy is revealed, the truth about Jonathan's father is revealed as well as further truths about Flick's own family. But the biggest reveal centres around Flick herself - who she is and what she is capable of. Whereas the story was previously shared between herself and Jonathan- highlighting his internal struggles as much as hers-this feels very much like Flick's battle as Jonathan becomes almost a secondary character, showing how much Flick has grown and how much the story has evolved. There's a lovely scene with Flick's parents and, as the age-old explanation of time standing still (or moving differently) in different worlds becomes strained to breaking point, L.D. Lapinski offers a brilliant fresh take on how to handle the constantly-disappearing-teen-who-never-comes-home issue.
As with the previous two novels, L.D Lapinski's fabulous imagination remains completely on point. I love the magical world that becomes 'the stormforest' and the extraordinary concept of the trees that live there. The plot is vividly imagined and executed with both skilful writing and timing and the true enemies are ruthless and horrifying. Again, there are themes of grief and loss, accountability and family and amid the relentless, fast-paced quest are some genuinely tender moments that give the novel its heart.
As you would expect at the end of the trilogy, there's a big and daring climax involving both old and new characters. But one particular thing that hit me here was how much this series has come into its own. Having previously spotted parallels - in a good way- to classic literature such as Peter Pan, Oz and Phillip Pullman's Northern Lights, I didn't make any such connections this time round, simply because this series is what it is; fresh, original, exciting and one which pushes the fictional science of worlds-with its schisms and magical energy-to new boundaries. What started out as a fantastically simple concept- travelling to different worlds through a variety of suitcases- has unpacked itself into a dark, complex fantasy trilogy that has more depth than an ocean. And that is what I love about it!
A big thanks to NetGalley for providing me with a review copy. The Strangeworlds Travel Agency: The Secrets of Stormforest is now available to pre-order.
at March 28, 2022