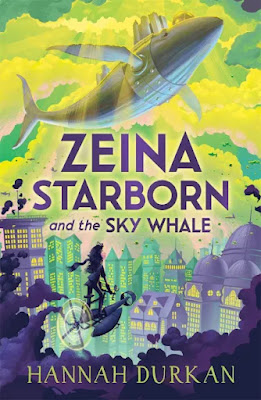 Link to publisher
Published by: Hachette Children's Group, 12th May 2022
👍👍👍👍
It's only a couple of weeks until Hannah Durkan's debut novel, Zeina Starborn and the Sky Whale, is launched into the world and - WOW!- what a treat reader's are in for. Winner of the Hachette Children's Group Northern Writer's Award 2020, this fantasy adventure is packed full of imagination and a cast of colourful characters.
Zeina Starborn is desperate to escape the smog-filled city of Ravenport where she is about to begin a lifetime of servitude. But her chance comes when she wins the chance to visit the Willoughby Sky Whale Hotel - a hotel in the Upper Atmosphere perched on the back of a flying whale. Drawn into a dazzling and exciting world, Zeina becomes starstruck. But Jackson, heir to the Willoughby fortune, senses something isn't right. Can he make Zeina listen as they become pawns in a deadly plot?
With echoes of Phillip Pullman's His Dark Materials series (but perhaps for slightly younger readers) and Vashti Hardy's Brightstorm, this is perfect for fans of adventure, inventions and airships. The narrative alternates between the viewpoint of Zeina - a flawed, feisty and rather loud heroine with huge ambition and heart (I loved her!)- and Jackson, the humble and timid heir to the Willoughby fortune. I really enjoyed the distinct personalities of these characters, their internal struggles and their contrasting backgrounds and the dynamic between the two was brilliant. There were some great villains, in lots of different guises, and if you loved Mrs. Coulter in His Dark Materials then she may have met her match!
Although airships and sky whales seem to have been quite popular in recent books, Hannah Durkan makes this plot completely her own. It was the concept of a hotel on the back of a whale which instantly pulled me towards this book and I wasn't disappointed. With a strong eco message, the sky whales' plight is the highlight of the novel - desperate, poignant and moving - with the reader being shown the devastation caused by humans rather than told. In fact, as a teacher, I firmly believe everyone needs to read the whale hunt scene.
There's some great twists and turns as the story progresses; some surprising revelations and very strong character arcs. Watch out for the nail-biting climax and I definitely have the feeling there is a LOT more to come from what hopefully will be a series.
A big thanks to Hachette for sending me a review copy. Zeina Starborn and the Sky Whale is now available to pre-order.
at April 27, 2022