Our Summer Round-Up Of Middle Grade Books (including what's coming up!)

Summer! And what a scorcher! Although there's never much time to review in the holidays, our reading time definitely increases. With lazy lie-ins, sleepy stories in the shade and trips to the library to complete the summer reading challenge, we've been whizzing through the pages. I've even been lucky enough, courtesy of NetGalley, to get my hands on some brilliant upcoming releases...

Fight Back by A.M Dassu 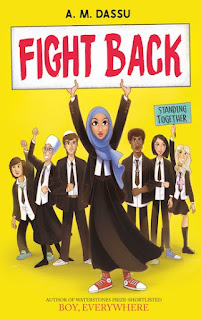 Following the success of Boy, Everywhere, A.M Dassu has released her second novel, Fight Back - a powerful story about identity and fighting hate and discrimination.

When Aaliyah and her friends are caught up in a terrorist attack at a local pop concert, fear grips both her and her community. It's not long before Muslims are being blamed  for the event and Aaliyah herself becomes the target of abuse.

Determined to fight back, Aaliyah makes the decision to wear a hijab at school. But when the school responds by banning all religious symbols, will she find support to continue her fight?

With an easy-to-read, accessible voice, this is a fantastic read for teens, young adults and adults alike. Although a fictional novel, it's clearly based on real-life events, giving a moving and deeply thought-provoking insight into the devastating impact of terrorism and the division, fear and hate it creates within a community.

What I particularly love about this novel is that it is firmly grounded in the life of a teen and full of school, friendship, older siblings and banter. And yet, amid all this, Aaliyah is grappling, not only with the horrors of the terrorist attack, but with the verbal and physical attacks she experiences on a personal level. With tensions running high, family, friendships and the stability of the whole community are threatened. This is the story of one girl's fight to make a difference.

A.M Dassu's writing makes you feel all the emotions, whilst opening readers' eyes to the truth of the world. It calls for change in the most important way - by showing, not telling, the story of a character we care about and who bridges the gap between fiction and reality. It's enlightening, empowering and needs to be in every library, school library and classroom! 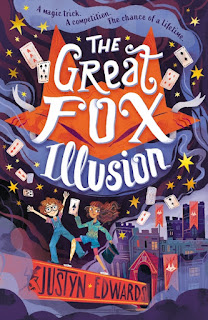 The Great Fox Illusion by Justyn Edwards
Link to publisher

Another brilliant read for upper middle-grade and teen readers is The Great Fox Illusion by Justyn Edwards. The first of a series, this is the story of Flick Lions, a young magician taking part in a TV show to win the prize of a lifetime...

The Great Fox is dead and now Flick Lions has been chosen to compete in a TV series to win his legacy. But solving puzzles and revealing the secrets behind magic tricks to win the prize is not what Flick is interested in. The Great Fox destroyed her family and she will go to any lengths to uncover the truth and put things right.

Hooked in just by the title, this debut novel really got my attention when I read an extract in WRD magazine. Not only does it appeal to readers who love mystery and sleuth stories, it also goes one step further by giving us the USP of magic tricks and illusions. Who doesn't want to know the secrets behind these -  well, apart from Flick? But the fun doesn't stop there. Set in a mysterious, old house full of endless secrets, with the addictive feel of a reality show, Justyn Edwards has really pulled it out the bag in terms of pace, plot and puzzles. It's Now You See Me ( a brilliant adult film) for children in book form and utterly mesmerising.

Flick is a great character. Slightly stand-offish at the start, I quickly warmed to her as we learn about her internal struggles and the high stakes that are involved in her bid to find the truth. Charlie creates a lovely balance to her reserve (as well as being totally loveable) and the mix of villains - both adult and child - works brilliantly. It was also great to see an amputee take centre stage as the main character and there are some poignant moments as Flick manages this.

For me, this ticks every box for a series. It's imaginative, packed full of puzzles and geniously put together. I absolutely can't wait for the next one...

UPCOMING RELEASE: Ember Shadows and the Fates of Mount Never by Rebecca King 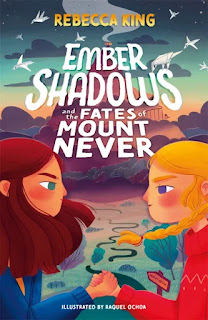 Link to publisher
Published by: Hachette, 18th August 2022
👍👍👍👍👍
Perfect for slightly younger or less confident readers, this is another high concept, debut novel with a brilliant premise. Similar to The Nightsilver Promise but on a simpler level, it features a girl without a fate...
When Ember Shadows receives a blank fate card, she has no idea what it means for her future. But when her sister's future also comes under threat, Ember resolves to journey up the mysterious Mount Never, through forbidden realms, to uncover the secret of what binds her people to their destiny.
With echoes of Labyrinth and Escape to Witch Mountain, this is a clever play on the often asked question: are our fates set or unset? Brilliant envisaged but not over-complicated, it explores humanity's fears about knowing or not knowing the future and the freedom to make choices. I absolutely loved the set-up of the novel, the forbidden realms of the mountain and the way the threads of fate were portrayed.
Ember is a fantastic character, relatable particularly by her motivation to help her nearest and dearest rather than herself. She is a strong but scarred heroine who pushes boundaries and asks the important questions. There is a strong theme of grief running through the novel, which I also found poignant, and which brings an extra layer to Ember's character.
In the same way as in The Wizard of Oz and Alice in Wonderland, Ember also attracts a following of quirky, lovable and fabulously original characters on her journey. I defy anyone not to love Hans but each one is great in their own right. The journey is also compelling, with each realm offering a freshness to the novel. The chapters based around fear were particularly powerful and Rebecca King doesn't hold back in her exploration of this. It was a thoroughly enjoyable, powerful read and I'm excited to discover that, despite standing alone, this is set to be a series.
UPCOMING RELEASE: The Whisperling by Hayley Hoskins 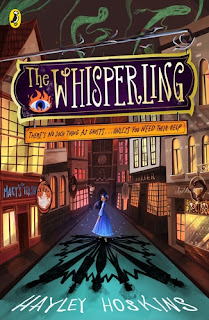 Link to publisher
Published by: Penguin, 1st September 2022
After hearing so much about this novel, I jumped at the chance to get my hands on a review copy (thanks NetGalley). This didn't disappoint. A dark, gothic novel, set in the late 19th century, this is compelling, character-driven writing that pulls you in from the get-go.
Focusing on poverty, the persecution of women that are different, corruption in the church, child labour, the dangerous working conditions of the 19th century and miscarriages of the justice system, including capital punishment for young adults, this might seem like a heavy read. And yet, Hayley Hoskins, another incredibly talented debut author, has woven all of these themes into a captivating story that I didn't want to put down. Laced with humour and underpinned by friendship, this is a ghost story you won't forget in a hurry...
Peggy is a whisperling. That means she can talk with ghosts. Keeping her gift hidden is hard enough, especially when the Reverend Silas Tate is on to her. But when her best friend, Sally, is accused of murdering her employer, Peggy must travel to the city and use her gift to find the truth...before Sally faces the death penalty.
Despite claiming to be more of a contemporary writer, Hayley Hoskins has nailed the world of 1897 Victorian Britain. Both the world and the characters jump vividly off the page, immersing us in the sights, sounds, smells and attitudes of village and city life. The characters of Ambrose, Cecily and Oti are brilliant fun and then there are the touching relationships that Peggy has with her mum, dad, little Bertie and, of course, Sally.
The plot is action packed. There's heartbreak and horror and probably the most chilling villain I've read in a long while. Also prepare for some last minute twists and turns and a nail-biting race to the conclusion. With a writer as talented as Hoskins and a whisperling as gifted as Peggy, let's hope there might be more to come.
UPCOMING RELEASE: The Lost Girl King by Catherine Doyle 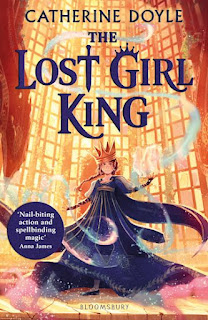 Link to publisher
Published by: Bloomsbury, 1st September 2022
👍👍👍👍
The latest offer from this very established author brings us an adventure based on Irish fairy tales. Perfect for fans of Lord of the Rings and those who love both folklore and portal fantasies, this is a story full of danger, magic and a quest to save a loved one.
When Amy and her brother Liam are packed off to Connemara to visit their gran for the summer, they soon find themselves in the legendary world of Tír na nÓg. But it doesn't take long for them to realise that something is very wrong and when Liam is kidnapped by an army of headless horsemen, Amy, with the help of a greencloak, the Fianna and a pooka squirrel, must find a way to save him and free the land from an evil curse.


This story is classic in feel. There are strong parallels to Narnia with a land cursed by an evil ruler and yet the story and the world-building is very different in feel. Amy is a headstrong, outspoken and not always likeable main character and yet her inability to listen, her ability to speak the truth and her steely courage makes her a strong, feminine lead in a world of men.


I really enjoyed the different landscapes in the novel. From forest, to castle, to fang lands, to swamps, the settings keep the story pacy and compelling. I found the unsual presense of adults in the novel - the Fianna warriors who are comparable to Aragorn and the elves in Lord of the Rings - really interesting and, for me, this brought to the fore something I haven't seen in a while in a fantasy story. Oscar and Culaan make for a great side story and I love how the relationship between Amy and Oscar develops.


The dual narrative between Amy and Liam works well. It offers us an intriguing insight into the world of the villain - a terrifying mage - and offers clever foreshadowing to the twist at the end. If you love fairy tales, magical worlds and epic quests then this is the book for you.