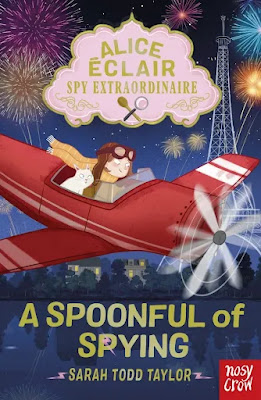 Perfect for competent middle-grade readers who love both spy stories and baking, this series is pure class. Packed with action and French panache, it is sublimely plotted, superbly written and has the effortless air of chic sophistication about it.

With the world's best inventors and artists descending on Paris for a World Fair, Alice is assigned to a dangerous undercover mission: to find out the identity of the enemy spies who are trying to steal the secrets behind a new aeroplane invention whilst also dazzling the fair with her baking talents.

But when agents start disappearing and her new friend is put in danger, Alice has to forget the baking and cook up a plan to save them all. Can she prove herself to the other far more experienced French spies?

With an excellent plot and lots of pacy, dynamic action, this is an engaging and mouth-watering read. As well as whipping up the genius combination of spying and patisserie, Sarah Todd Taylor has also included trains and planes within the first two books, making it comparable to the epic Adventures on Trains series. Stories set in Paris always seem to prove pretty special and the fact Alice's adventures are dated just before the World War II gives the story a really authentic feel.

As if that isn't enough, Alice's spying adventure also whisks her into the world of fashion, prompting a very clever plot twist. Although Alice comes across as a rather grown-up character for her age, I particularly love how she embraces her mistakes and her personality and determination is endearing. She's definitely a female Bond in the making - quick-witted, personable and charming. The world is definitely as elegant as Bond's with super high stakes. Wrapped up in a front cover which is as pretty as pink icing, courtesy of Beatriz Castro, DO NOT underestimate the power of this 'cosy' read - it seriously packs a punch!

A big thanks to NetGalley and Nosy Crow for allowing me a review copy. A Spoonful of Spying is released in the UK on 12th Jan 2023.