UPCOMING RELEASE: Where The River Takes Us by Lesley Parr 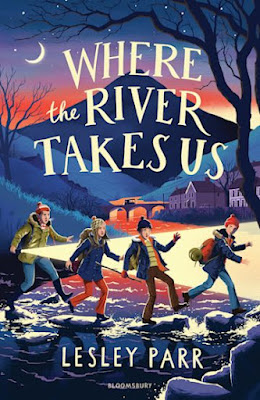 Set in Wales in 1974, Lesley Parr brings us her third historical novel which explores the impact of the miners' strikes and the three day working week on a group of friends living in a Welsh village.

Thirteen year old Jason is struggling to come to terms with the death of his parents. But things get an awful lot tougher when the three day working week means his older brother, Ritchie, can no longer pay the bills.

As Ritchie gets sucked into working for a criminal gang to avoid them being separated, Jason becomes increasingly desperate to get his hands on some honest money. So when he hears there's a reward for finding proof of a beast roaming the valley, Jason and his friends set off to search for it...

With Lesley Parr's effortless writing and a fast-moving plot, this is an old school adventure to rival Stand By Me, The Famous Five and The Goonies. Set in the outdoors in freezing February, Jason and his friends take us on their journey along the river, past barns, churches and a very scary bull in search of a huge cat. There's camaradie and clashes aplenty as the group of four bond and bicker amid very high stakes, plus there's a whole heap of obstacles for them to overcome, including a pair of bullies.

In truth though, this novel is not really about searching for an elusive beast. What it is about is community, hardship, friendship, family and grief. Lesley Parr handles Jason's devastating loss with truth and sensitivity and then balances it with a big dose of heart and humour that can only come from close friends, leaving us with tears on one page and smiles on the next. It's an insight into the working class conditions of the 1970's and human nature at its best. Digging even deeper than that though, the very heart of the book is also about making the right choices in the worst circumstances, about finding the best path forward - literally and metaphorically - and about hope. For me, there were also echoes of Billy Elliott, but without the ballet.

So, if you're looking for a brilliant written, down-to-earth novel that's more about brotherhood (with a brilliant female friend too) than finding a beast, this is definitely one to add to your to-be-read pile. With a dramatic and heart-racing end, will Jason be separated from his brother and his friends?

A big thanks to Bloomsbury and NetGalley for allowing me a review copy. Where The River Takes Us is available to pre-order and out on the 16th March 2023.