Yesterday Crumb and the Teapot of Chaos by Andy Sagar 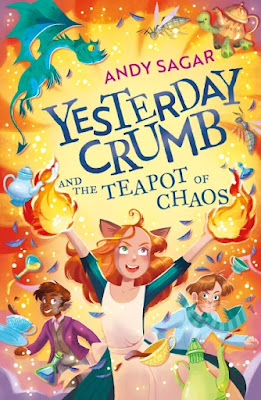 A year ago, I picked up Andy Sagar's Yesterday Crumb and the Storm in A Teacup and found myself immersed in a fantastical world full of tea witchery and magical creatures, all housed within a walking teashop. Twelve months later, Yesterday Crumb is back and - wow! - have things moved on. For if you're expecting to drink in more of the cosy atmosphere inside Dwimmerly End, think again as the story explodes into a full-blown epic fantasy which crackles with tension and wild, wild magic.

Yesterday Crumb is looking forward to watching the Wild Feast in London. But when her beloved Dwimmerly End is stolen, with Miss. Dumpling inside, Yesterday is forced to enter the competition to win it back.

Things very quickly go from bad to worse when, on top of trying to win the competition, the Faerie Queen accuses Yesterday of being responsible for the disappearances of some of the Faerie Court. Ordered to prove her innocence, Yesterday and her friends investigate, only to find that something truly terrible is going on...

This second novel is as volatile as Yesterday's magical teas, exploding across the page in every sense of the word. There's a cacophony of new characters, wondrous world-building and brooding battles all framed within our familiar reference of London. Whereas in the first novel, we see Yesterday exploring her magical ability under the guidance of her mentor, Miss. Dumpling, Yesterday and her friends are now very much on their own and outside the safe environment of their teashop home. There's villains galore with the menacing ice of Mr. Weep underlying them all but will Yesterday be able to overcome everyone who is against her?

This is a story about a girl exploring the true extent of her strength and power. It's about prejudice, friendship, family, right and wrong and the complexity of the world we live in. Ultimately, though, like many fantasy novels it is about the battle between good and evil and how our family history does not need to define us. The plot is pacey and packed with problems for Yesterday to overcome; from reasoning with merpeople to a cook-off with a pair of werewolves to caged monsters roaming free. And the action is far from over as Andy Sagar leads up to what promises to be an inncredible book three.

So, if you're a big fan of magical fantasy, such as Nevermoor, this is not a series to miss. Despite the dramatic twists and turns and the freezing frostiness of Mr. Weep, it's still impossible not to be warmed and enchanted by the excitement of Yesterday's tea magic and heartwarming friendships. Magic and food and drink combined? What is not to love?

A big thanks to NetGalley and Hachette (Orion) for allowing me a review copy. Yesterday Crumb and the Teapot of Chaos is available to pre-order and released in March 2023.