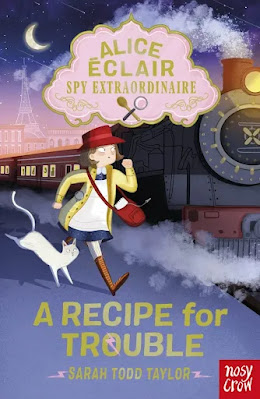 As an aspiring writer, I'm often told, 'Write the story you wanted to read as a child'. The problem is, I don't always know what that is until I've seen it. But now I've seen it! Just like with Laura Ellen Anderson's Rainbow Grey, Alice Eclair, Spy Extraordinaire is a story I would have gobbled up as a child faster than Alice's patisseries. I mean, what more could you want than a good old mystery whisked together with some mouth-watering baking?

'Baker by day, spy by night', Alice Eclair leads a busy double life. When a mysterious message sets Alice a mission on board France's most glamorous train, the teenage sleuth must combine her baking and her spy skills to complete the daring and dangerous task. But who should she trust...NO ONE!

Perfect for fans of  the Adventures on Trains series, baking fanatics and young detectives, this novel is pacy, punchy and totally enthralling, moving faster than the train Alice is on itself. After falling in love with the gorgeous front cover, designed by Beatriz Castro, I wasn't quite sure what to expect. Was it a chapter book? A story for lower middle grades? Whatever it was, it looked inviting enough to jump right to the top of my huge TBR pile.

However, the actual story inside the pages blew me away. If you're expecting a light-hearted frothy story, think again. Yes, there is froth and icing and shimmery stars, but the tale Sarah Todd Taylor has plotted is fun yet hard-hitting, with a serious nod to the work spies did during World War II and the lives that were balanced on a knife edge, depending on who got the upper hand. This is slightly more than a fictional spy novel and I felt that, through her history lesson, Sarah Todd Taylor truly opened my eyes to the real risks of being a spy, placing it, for me, in the middle-grade age-range. I loved Alice's strong, determined character and it was really refreshing to see a brilliantly capable female spy in the making.

So, if you love danger, daringness and the temptation of something delicious, this series is definitely one to devour. With a narrative that's twistier and turnier than train tracks and surprises that will jolt you out of your seat, the secret is out -IT'S BRILLIANT!